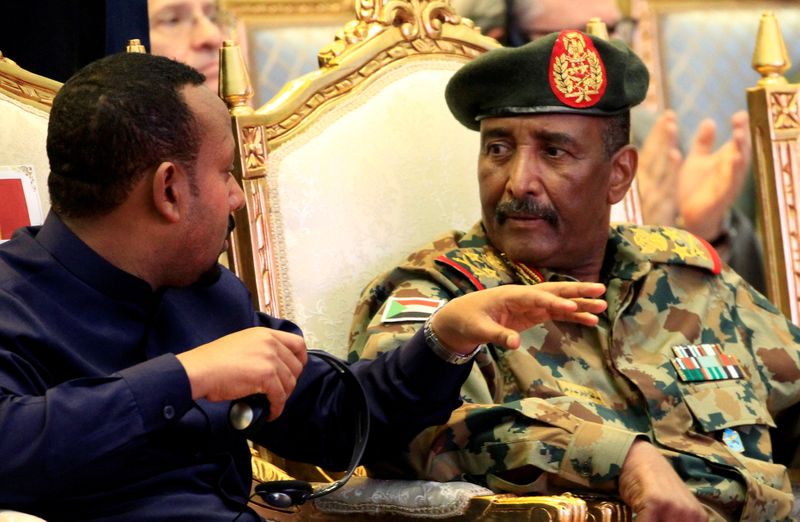 WASHINGTON/DUBAI/KHARTOUM (Reuters) – Despite over a year of negotiations, Sudan is facing a fresh obstacle to its removal from a U.S. terrorism list that has hindered its economy: a demand that it normalize relations with Israel, three sources familiar with the matter said.

However, three Sudanese government officials told Reuters on Thursday that Sudan is resisting the linkage of the two issues, which comes as U.S. President Donald Trump has been touting himself as a historic peacemaker on the campaign trail.

Sudan’s designation as a state sponsor of terrorism dates back to its toppled ruler Omar al-Bashir, and makes it difficult for its new transitional government to access desperately needed debt relief and foreign financing.

Sudan’s skyrocketing inflation and plummeting currency have been the biggest challenge to the stability of Prime Minister Abdalla Hamdok’s transitional administration.

Many Sudanese say the designation, imposed in 1993 because the U.S. believed Bashir’s regime was supporting militant groups, is now undeserved as he was removed last year and Sudan has long cooperated with the U.S. on counter-terrorism.

“Sudan has completed all the necessary conditions,” a Sudanese official told Reuters on Thursday. “We expect to be removed from the list soon.” U.S. Secretary of State Mike Pompeo said in a letter to Congress last week that the administration was looking to remove Sudan from the list in October.

The White House and State Department declined to comment when asked about the status of negotiations.

In talks with military head General Abdel Fattah al-Burhan this week, U.S. officials indicated they want Khartoum to copy the example of the United Arab Emirates and Bahrain and open ties with Israel, two U.S. and one Gulf-based sources said.

The United States has offered Sudan development and humanitarian help as well, the U.S. and Gulf-based sources said.

“Sudan made clear to the American side that there is no relationship between removing Sudan from the terror list and exploring relations with Israel,” a Sudanese government source said, reiterating a message from Hamdok to Pompeo last month.

Burhan’s military-led sovereign council said he had discussed the future of Arab-Israeli peace with U.S. officials, and the government would discuss the topic internally, according to the “interests and aspirations of the Sudanese people.”

A senior U.S. official told Reuters that Washington was prepared to allow time for Sudan to decide, saying that there were disagreements between the military and civilian government on how to proceed.

Burhan and Israeli prime minister Benjamin Netanyahu held a surprise meeting in Uganda earlier this year. Yet opening ties is sensitive, as Sudan was a staunch foe of Israel under Bashir and some parties in the transitional coalition oppose taking such a step.

Even if a normalization deal is struck, the U.S. Congress is holding up necessary legislation restoring Sudan’s sovereign immunity, the principle that prevents lawsuits against sovereign governments, which it lost because of the terrorism designation.

Sudan wants the legislation passed before it releases a $335 million settlement to victims of al-Qaeda attacks on U.S. embassies in Kenya and Tanzania in 1998, the funds for which it said on Wednesday were secured. The settlement was the most significant condition officially placed by the United States.

Sudan’s lawyers in the United States said it had already paid an additional $72 million to victims of a 2000 al-Qaeda attack on the USS Cole. “This is more than Sudan can afford,” lawyer Christopher Curran said.

“We want to ensure the passing of the immunity law so that we can put an end to the settlements matter,” the Sudanese official said.

The legislation was left out of a spending bill under consideration this week because of concerns from New Jersey Senator Bob Menendez and New York Senator Chuck Schumer that sovereign immunity would make it more difficult for victims and insurers to sue Sudan for damages tied to the 9/11 attacks, Congressional sources say.

Schumer’s office did not respond to a request for comment, but Menendez has made his opposition clear in statements.

Backers of the Sudan legislation said they still hoped to reach a compromise that would let the measure quickly pass the Senate. Sources say that compromise could include an exception to Sudan’s immunity making it easier for 9/11 lawsuits.