In Tokyo’s lockdown, some drink on even after authorities call time 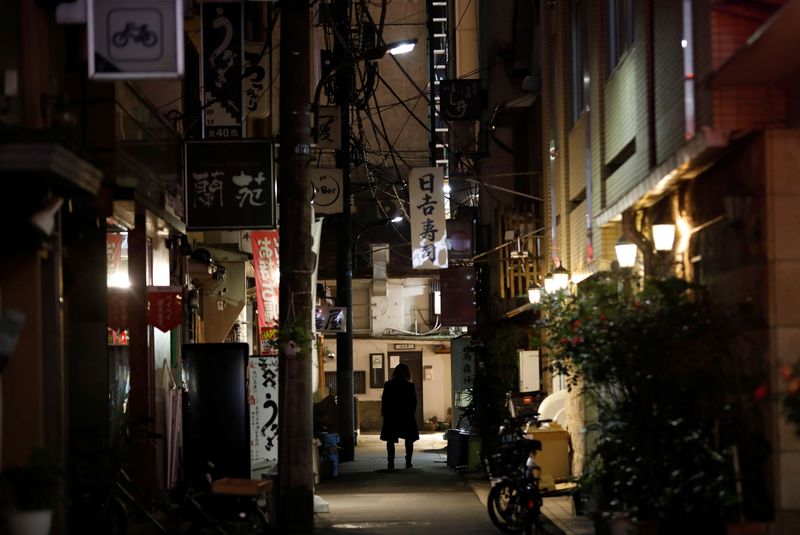 By Irene Wang and Daniel Leussink

TOKYO (Reuters) – For Yuuki Hamazono, it was a relief to find bars and restaurants in Tokyo flouting the Japanese government’s request to close by 8 p.m.

The 30-year-old financial trader was one of many people out in the Shimbashi nightlife district during the first weekend of an expanded state of emergency, with the government pleading for residents to stay home to contain the coronavirus.

Prime Minister Yoshihide declared a state of emergency for Tokyo and surrounding prefectures this month. He expanded it to 11 prefectures accounting for 55% of the population on Wednesday. Unlike in many other countries with mandatory lockdowns, Japanese authorities legally can only urge people to stay at home and businesses to close.

While compliance has been high – most of Shimbashi’s karaoke bars and izakaya taverns were closed on Friday night – more people appear to be ignoring the state of emergency this time than one last year.

“There are people who can’t have dinner until after 8 p.m., including me,” Hamazono said, citing his working hours. He and a friend were looking for a place to duck into among a jumble of izakayas on Shimbashi’s narrow streets.

Nearby, touts called out on the street, advertising places that were still open.

Authorities have worried about the potential spread of infection at bars and restaurants. In Shimbashi, many drinking spots are cramped and with poor ventilation.

The government has offered subsidies to establishments that close on time, but some say it’s not enough, and worry about losing customers.

“Though there are subsidies, for restaurants and bars the relations of trust are important,” said Yuji Tobe, a 34-year-old barman in a standing-only drinking spot, where wooden tabletops rest on stacks of plastic crates.

“We have a bond with our customers.”

Tobe’s bar was nominally closed, although two regulars were still being served.

Some criticise what they call a half-hearted government response. Suga has been accused of being slow to act out of fear of damaging the economy. His support has plunged.

“It’s unclear whether getting the economy going or stopping corona comes first,” said a man who gave his name only as Kazumasa. He was queuing for one the restaurants under the train tracks serving yakitori, skewers of grilled chicken.

The government is considering an amendment to give authorities more power to enforce a lockdown, the minister in charge of administrative and regulatory reform, Taro Kono, told Reuters on Thursday.

Until then, it seems likely that many will keep drinking.

“There are many times we need to talk business over drinks. That kind of communication is necessary to do business,” said 48-year-old Motoki Mori, the owner of an event production company who was headed to a bar with his business partner.

“I don’t think you can put a cut-off time on that.”