: How a weaker dollar could help fuel a commodities boom in 2021 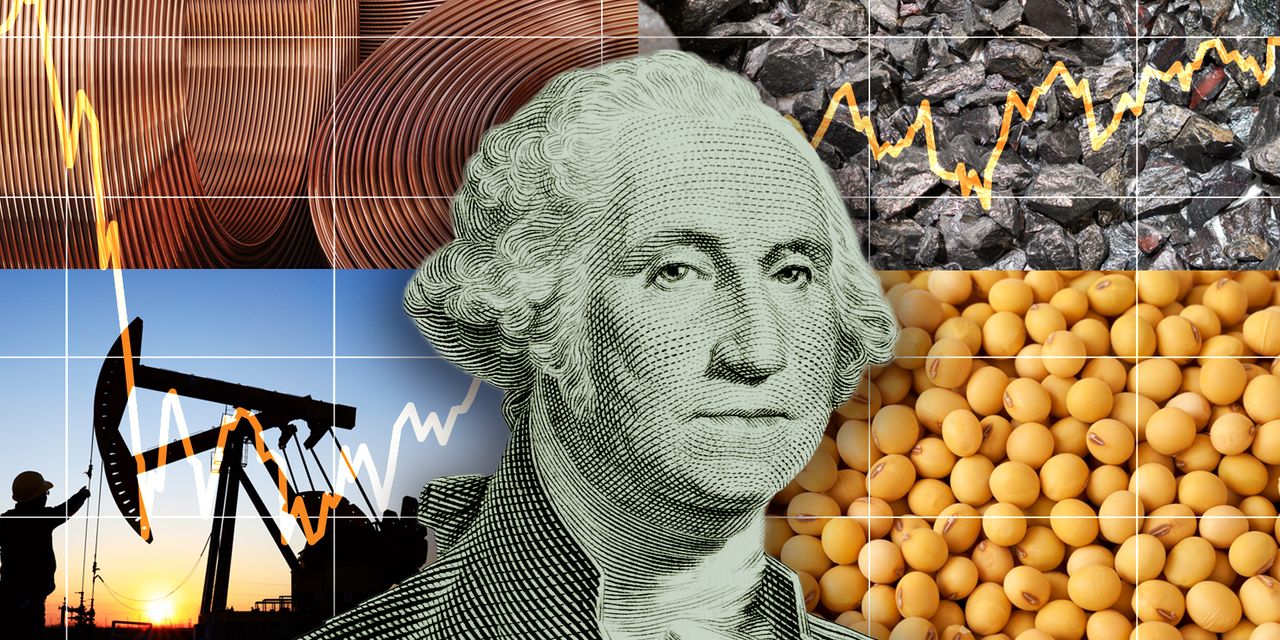 Long-suffering commodity markets may have turned a corner after a pandemic-induced collapse in 2020. What happens next may depend on the fate of the U.S. dollar.

“The only way to get commodities moving in an inflationary, buying power way is a weaker dollar,” said Doug King, head of RCMA’s Merchant Commodity Fund and one of the world’s best known commodity traders, in an interview with MarketWatch.

And a glide path to a weaker dollar does indeed appear to be in place, King said.

2020 was a messy and volatile year for commodities, as it was for other assets. But commodities are coming off a long stretch of weakness after a China-fueled commodity boom — part of what some economists and investors labeled a supercycle — appeared to peak in 2011.

Related: Why Goldman Sachs sees a bull market for commodities brewing in 2021

The signature event of 2020 came in April when a crash in oil prices saw West Texas Intermediate crude futures traded on the New York Mercantile Exchange trade — and close — in negative territory for the first time ever. In other words, traders were paid to take crude off other traders’ hands.

The debacle underscored the shock that rocked financial markets and the global economy as activity around the world ground to a near halt in an initial effort to contain the COVID-19 pandemic.

It wasn’t just oil that suffered. The Bloomberg Commodity Index
BCOM,
,
which tracks 23 commodity futures markets, traded at an all-time low in April based on data going back to 1991, according to Dow Jones Market Data.

Since then, a broad-based commodity rally has seen the index rise more than 27% from its low, though it remains down more than 7% for the year.

Much of the rebound has come as China, where the novel coronavirus that causes COVID-19 first emerged in late 2019, remains in recovery mode. After being the first major economy to be slammed by the virus, China — and much of the rest of Asia — have appeared to do a better job containing the virus, sparking a resurgence in economic activity and prompting a sharp rise in demand for a range of commodities, including corn, soybeans and industrial metals.

Analysts at Montreal-based Pavilion Global Markets noted that Chinese demand for commodities, including oil, soybeans, and more recently, copper, is outpacing the level seen during the peak of China’s industrialization, which fueled the early 2000s surge in commodity prices.

“It isn’t just copper either; the prices of various industrial metals, from lead and iron ore to nickel and zinc, are rising,” they said in an Oct. 31 note.

The developed world remains the wild card, but ultralow interest rates, high savings rates and governments that appear committed to spending on infrastructure and avoiding austerity fuel optimism both for demand and the potential for an inflationary backdrop that would be a positive for a range of commodities.

Bullish expectations also are being fueled by supply constraints, which have been exacerbated for some commodities, including metals, amid pandemic-related shutdowns of mines and other interruptions to supply chains. What’s more, those constraints come as weak prices for a range of commodities have left investment and productive capacity at low ebb.

S&P Global Market Intelligence, in a June report, described a “dismal decade” of underinvestment in the industry. The report noted that there have been 224 copper deposits discovered between 1990 and 2019. But only 16 were found within in the past 10 years and just one since 2015. And while there are still plenty of undeveloped discoveries, most are smaller or low-grade, the report found, with few high-quality assets available for development.

Tight supplies also are a factor for agricultural commodities. The U.S. Department of Agriculture in December lowered its estimate of ending soybean stocks for the 2020/21 marketing year to a seven-year low of 175 million bushels. Corn stocks are also seen tight at 1.7 billion bushels.

Again, rampant Chinese demand is a key factor. China has sucked up soybeans from the U.S. and South America as it moved to restock a swine herd decimated by African swine fever in 2019.

With supplies tight, “we can’t afford to have a huge disaster of a crop in North or South America,” King said.

The current backdrop is reminiscent of what’s been seen at the start of previous up swings in the commodity cycle, according to bullish investors. Those signposts include a global economy coming out of recession, prospects for ample fiscal stimulus that should translate into increased infrastructure spending and ultralow interest rates and ample liquidity looking for a home.

“I think we’re at the start of a multiyear commodity bull market,” Saad Rahim, chief economist for Trafigura, one of the world’s largest commodity traders, told MarketWatch.

Demand isn’t set to snap back to pre-pandemic levels across the board. Passenger airline travel might be able to return to 80% to 90% of its previous level by next summer, but that would still mark a substantial pickup in demand from current levels for jet fuel, the petroleum product that suffered the hardest hit as COVID-19 all but halted airline traffic.

The push for renewable energy will heat up demand for a variety of metals, with increased production of electric vehicles boosting demand for nickel and cobalt, Rahim said.

Some analysts see a mixed picture for commodities, however. While a weaker dollar and the potential for a fuller global economic reopening next year should be a boon for more cyclical commodities, including metals and grains, other areas see ample supplies, said Rob Haworth, senior investment strategist at U.S. Bank Wealth Management, in an interview.

Oil, for one, could see rising prices met with a quick return to output by U.S. shale producers. Meanwhile, the demand outlook is clouded given the unknown extent the work-from-home phenomenon will persists beyond the end of the pandemic, undercutting fuel demand.

But supplies for many commodities are tight and demand is ramping back up. What about the dollar?

A weaker currency can provide a boost to commodities that are largely priced in U.S. dollars. A cheaper dollar makes those commodities less expensive to users of other currencies.

The dollar rode a roller coaster in 2020, surging in February and March as the pandemic sparked global financial turmoil and a rush for greenbacks by businesses world-wide. Aggressive moves by the Federal Reserve and other central banks, particularly the expansion of dollar swap lines between the Fed and its counterparts, helped ease the crunch.

As markets calmed and stocks bottomed out, the dollar came under pressure. The ICE U.S. Dollar Index
DXY,
,
a measure of the currency against a basket of six major rivals, tumbled from a more-than-three-year high in early March to test levels last seen in April 2018. And the consensus call appears to be that the trend for the dollar has turned, potentially heralding years of softness versus major rivals.

A weaker dollar isn’t about a weak U.S. economy, but is more about stronger growth outside the U.S., analysts said. And that’s part of the reason why a weaker dollar is seen as a positive for commodities.

China has allowed its currency
USDCNY,

to strengthen significantly, which has aided its buying power as it goes on a commodity buying spree, Rahim said. The inflationary impetus from a weaker dollar just adds to a “virtuous circle” that’s positive for commodities, Rahim said.

What’s more, the potential for significant dollar moves is often underestimated, he said, noting the currency tends to move in five to 10-year cycles. “People don’t talk about the dollar moving 30% to 40% (over the course of cycle), but look at history and it does,” he said.

“The dollar is very important,” said King, whose Merchant Commodity Fund was up 20% for the year to date through early December. The teeth of the 2004-2011 commodity boom went hand in hand with a weaker dollar and the boost to buying power it provided commodity importers.

What could go wrong?

In the near term, the potential for hiccups center on renewed lockdowns that could end up curtailing activity and commodity demand, Rahim said. Longer term, a policy mistake in which central banks move too quickly to withdraw stimulus would be a bigger threat.

But Rahim said he does think the pickup in demand is likely to prove self-sustaining.