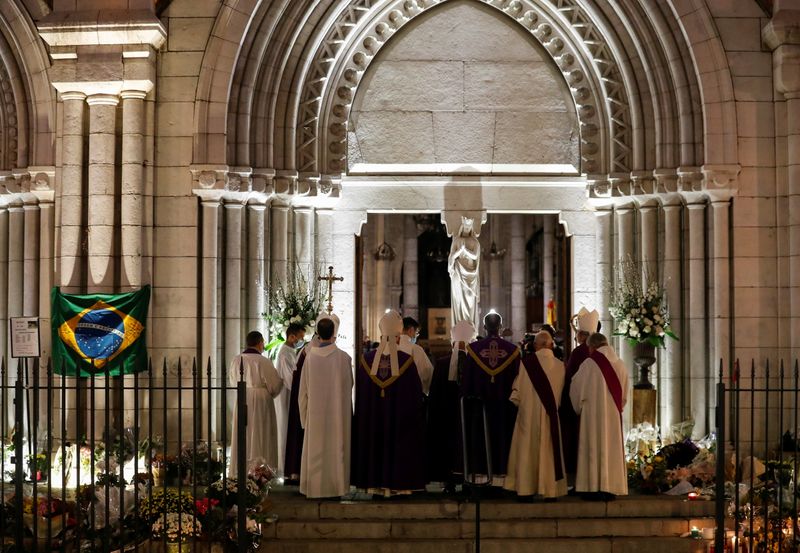 NICE, France (Reuters) – Shocked local parishioners gathered outside the Notre-Dame catholic church in the southern French city of Nice on Sunday, seeking solace at its first mass in the three days since a knifewielding attacker killed three people inside.

In France’s second deadly knife attack in two weeks with a suspected Islamist motive, an assailant shouting “Allahu Akbar” (God is Greatest) beheaded a woman and killed two other people in the basilica.

Church sexton Vincent Loques was one of the victims, along with devout mother-of-three- Simone Barreto Silva, who moved to France from Brazil as a teenager. A 60-year-old woman, named by church officials as Nadine, was beheaded.

On Sunday evening, several hundred people gathered on the other side of a security perimetre around the church to follow the mass from a distance.

“I was baptised here, took holy communion here… my parents were buried here. It was very important to come out of solidarity,” church regular Michele, 67, said before the mass got underway. “It was a shock… It was a barbaric act.”

The Nice attack followed the beheading of a Paris schoolteacher on Oct. 16 by a Chechen-born man, apparently angered that the teacher had shown cartoons of the Prophet Mohammad to teach a lesson on free speech.

Standing on the steps of the church, which was covered in wreaths and candles, the bishop of Nice, Andre Marceau, paid tribute to the three victims.

“The meaning of this celebration is to speak of… our bewilderment, our sadness, our suffering, our feeling of anger maybe, our struggle to understand,” Marceau said ahead of the mass. “And above all, to give strength to our peacemakers.”

The church is located not far from the seaside promenade, where a suspected Islamist drove a 19-tonne truck into a crowd in 2016, killing more than 80 people on Bastille Day.

The people of Nice had suffered enough, said Martine Leroy, a local resident outside the church.

“We form a bloc today, and people need to see this bloc, the whole world needs to see it,” she said. “It all has to stop. We’re here to tell our leaders that we’ve had enough, we want to be able to be at ease walking around in our city.”