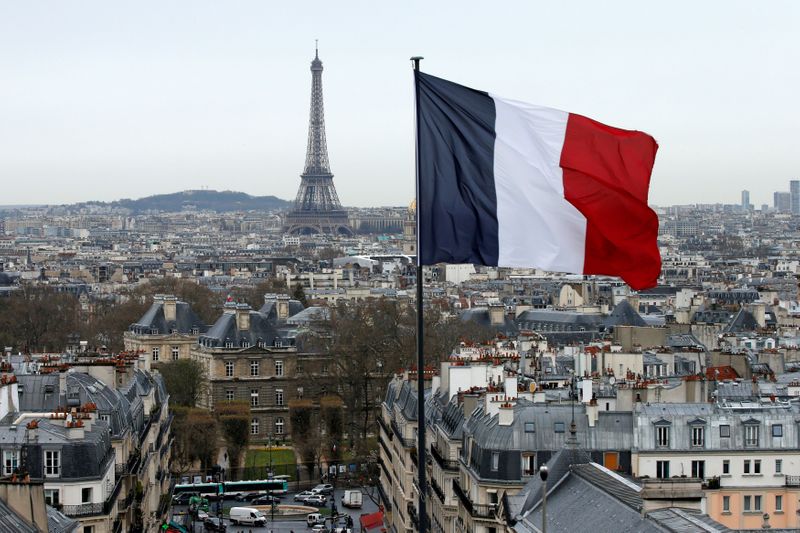 © Reuters. FILE PHOTO: A French flag waves above the skyline as the Eiffel Tower and roof tops are seen in Paris, France

PARIS (Reuters) – The French government on Monday presented a 2021 budget plotting a path out of its worst post-war recession, with 42 billion euros pumped into the economy in the first year of its 100 billion euro two-year recovery plan.

The government expects the euro zone’s second-biggest economy to contract a record 10% this year following a nearly two-month coronavirus lockdown, plunging the country into one of the deepest recessions in Europe.

Paris has mobilised more than 470 billion euros in tax breaks, state-subsidised furloughs and business loan guarantees to contain the crisis, blowing the public sector budget deficit out to a record 10.2% of GDP this year.

The economy bounced back after the lockdown was lifted in May and the government forecasts it will surge 8% next year, boosted by the first tranche of the 100 billion euro recovery plan.

“We are going to make sure that the 42 billion euros are spent rapidly,” Finance Minister Bruno Le Maire told journalists in a presentation of the 2021 budget.

The Public Finance High Council, an independent oversight panel, said the growth forecasts were cautious for this year but ambitious for 2021 and said the deficit targets were reachable.

The COVID-19 outbreak blew a more than 100 billion euro hole in the central state’s deficit, which swelled to 195 billion euros this year and has to financed by additional debt.

Le Maire said that the extra debt would be paid down through the return of economic growth, careful budget management and structural reforms such as a planned pension overhaul, which the coronavirus epidemic put on hold.

He added that if France was able to make the billions of euros in investments foreseen by its recovery plan, it was thanks to low borrowing costs created by the European Central Bank’s monetary stimulus.

“The European Central Bank is protecting and allowing us to carry out our recovery programme,” Le Maire said.