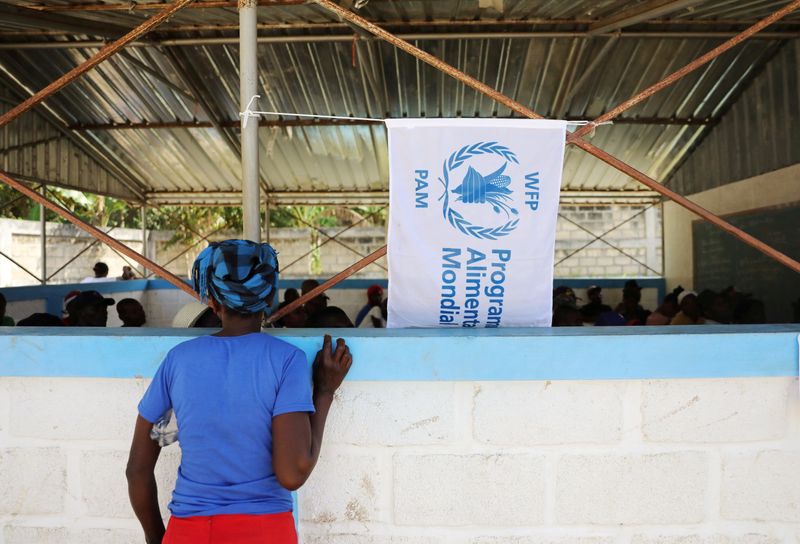 © Reuters. FILE PHOTO: A woman watches as money is distributed by the World Food Programme in Bainet

By Nerijus Adomaitis and Stephanie Nebehay

OSLO/GENEVA (Reuters) – The United Nations food agency, the World Food Programme (WFP), won the Nobel Peace Prize on Friday for its efforts to combat hunger and improve conditions for peace in areas affected by conflict.

The Rome-based organisation says it helps some 97 million people in about 88 countries each year, and that one in nine people worldwide still do not have enough to eat.

“The need for international solidarity and multilateral cooperation is more conspicuous than ever,” Berit Reiss-Andersen, chairwoman of the Norwegian Nobel Committee, told a news conference.

The WFP is a driving force in efforts to prevent the use of hunger as a weapon of war and conflict, and the COVID-19 pandemic, which the WFP says could double hunger worldwide, has made it even more relevant, she said.

“Until the day we have a medical vaccine, food is the best vaccine against chaos,” the Nobel committee said in its citation.

WFP runs a logistics service that has dispatched medical cargoes to over 120 countries throughout the pandemic to help governments and health partners fighting COVID-19.

It also has provided passenger services to ferry humanitarian and health workers where commercial flights were unavailable.

“It’s because of the WFP family,” he said. “They are out there in the most difficult, complex places in the world, where there’s war, conflict, climate extremes – it doesn’t matter. They are out there and they deserve this award …

“This is the first time I’ve been speechless … This is unbelievable,” he said. “And wow! Wow! Wow! Wow!”

In a written statement, he added: “Today is a reminder that food security, peace and stability go together. Without peace, we cannot achieve our global goal of zero hunger; and while there is hunger, we will never have a peaceful world.”

“Everything went into shutdown following nationwide and global restrictions following COVID-19. The WFP stepped up to the plate, we were able to connect communities. At one point, we were the biggest airline in the world, when most, if not all, commercial airlines had ground to halt.”

Dan Smith, director of the Stockholm International Peace Research Institute, said the Norwegian Nobel Committee had wanted to send a message of both hope and “support for international cooperation”.

“Hunger, like climate change, the pandemic and other issues, is a world problem that can only be properly addressed through cooperation. The World Food Programme is an institution of global cooperation,” he told Reuters.

“Unfortunately, in too many quarters, especially among the great powers, there is a declining appetite for cooperation,” he said, adding that world hunger was increasing again, having declined for several decades until 2016.