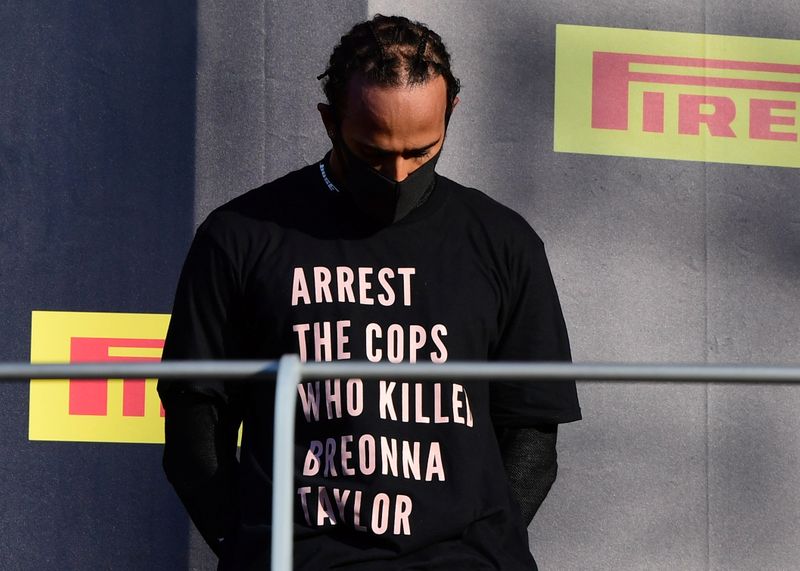 (Reuters) – Formula One’s governing body set out new pre- and post-race rules for driver attire on Sunday in a move that bars world champion Lewis Hamilton from wearing campaigning T-shirts on the podium.

The Briton wore a black T-shirt at the Tuscan Grand Prix two weeks ago with the words “Arrest the cops who killed Breonna Taylor” on the front and a photograph of the slain Black medical worker on the back with “Say her name”.

Taylor was killed by police officers who burst into her apartment in Louisville, Kentucky, in March.

The Mercedes driver, a six-times world champion, has also routinely worn a Black Lives Matter T-shirt when taking a knee alongside other drivers before races in an organised and officially sanctioned anti-racism campaign.

Hamilton, who could equal Michael Schumacher’s all-time record of 91 wins in Sunday’s Russian Grand Prix in Sochi, had said this week that he expected the governing FIA to react.

The rules require drivers to wear T-shirts with the “End Racism” message in the pre-race activity before the national anthem.

Hamilton reverted to wearing the Black Lives Matter shirt on Sunday, when he also took a knee.

The FIA said drivers may still choose their own individual gesture of support but “in accordance with the fundamental principles” of the FIA statutes.

Suggested gestures include taking the knee or standing with arms crossed or head bowed.

After the race, the top three drivers must keep their race suits done up to the neck – rather than opened to the waist – throughout the formal part of proceedings.

That includes the interviews after stepping out of their cars and the podium ceremonies.

Every driver finishing the race must also remain in team uniform only during television pen interviews.

Hamilton, the sport’s only Black driver, had said on Thursday that he would not stop campaigning for racial equality and using his platform to raise awareness of issues close to his heart.

He recognised, however, that the FIA had “certain limits that they feel they have to work within”.

“People do talk about sport not being a place for politics. Ultimately it’s human rights issues and in my opinion that is something we should be pushing towards,” he said.

“Lots of rules have been written for me over the years and that hasn’t stopped me.”