Exclusive: How COVID-19 stimulus money will end up in U.S. tobacco farmers’ pockets 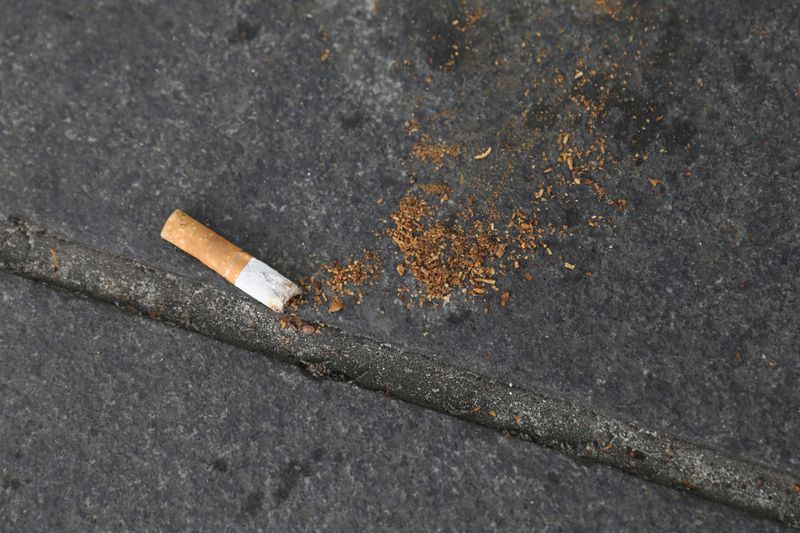 © Reuters. FILE PHOTO: A cigarette butt lies on a street in New York

By P.J. Huffstutter and Tom Polansek

CHICAGO (Reuters) – U.S. government aid payments to tobacco farmers will be channeled through a new account within the office of the agriculture secretary, an unusual move that bypasses the normal mechanism for distributing farm aid and stokes concerns about how the government is using COVID-19 stimulus.

The U.S. Department of Agriculture (USDA) on Friday said it will pay up to $100 million to tobacco farmers from Congress’ coronavirus economic stimulus package, as part of a $14 billion assistance program for farmers hurt by the pandemic.

The existence of the new USDA account has not been previously reported. In response to questions from Reuters this week, USDA said there was nothing wrong with the new account – which it originally set up this spring – and said it has taken steps to track the flow of funds.

The agency opened the new account because of how Congress apportioned money from the Coronavirus Aid, Relief, and Economic Security (CARES) Act passed in March and to simplify the process of paying farmers, a USDA representative said.

Lawmakers typically apportion emergency funds to an agency and existing accounts set up at the division that would handle a program, according to agricultural and government analysts.

Groups including the American Lung Association and Campaign for Tobacco-Free Kids were dismayed that aid meant for Americans struggling with fallout from a deadly lung disease was earmarked for tobacco.

Most U.S. crop subsidies are paid via the 1930s-era Commodity Credit Corporation (CCC), which gives USDA broad authority to make direct payments to growers when crop prices are low.

However, a 2004 law known as the tobacco buyout blocked tobacco growers from receiving CCC funds. The USDA says the tobacco money will not come from CCC.

Instead, the agency said in response to questions from Reuters that the $2.3 trillion CARES Act gave it the authority – and a different pool of taxpayer dollars – to issue the tobacco aid.

In a statement to Reuters, USDA said that if Congress wanted to block tobacco farmers from this money, it would have specifically excluded them in the law.

Some economic and legal experts said the 2004 law eliminated the government’s role in funding tobacco price supports and worry the Trump administration is not being transparent.

“The reality is that Congress would have to explicitly authorize paying tobacco farmers,” said Jonathan Coppess, director of the Gardner Agriculture Policy Program at the University of Illinois, and a former Obama administration official.

Tobacco was not included in the first round of coronavirus aid for farmers announced in April. Lawmakers subsequently spoke with USDA about crops left out of the $19 billion program, such as cherries, olives and raisins, according to USDA, and legislative and industry sources.

He said North Carolina tobacco farmers lost about $200 million in sales potential to China. Farmers had expected exports to improve on the back of a trade agreement Washington and Beijing struck in January.

“Because of coronavirus we had no ability to meet and negotiate and transact and do business with the Chinese,” Boyd said.

“It is a legal, legitimate commodity and to not include it is discrimination, plain and simple.”

Some tobacco farmers filed for bankruptcy because of the pandemic, said Shawn Harding, president of the North Carolina Farm Bureau. He did not have estimates of lost jobs.

As part of the coronavirus stimulus in March, lawmakers approved $9.5 billion in CARES Act funding for agriculture. The CARES Act provided financial relief to people and businesses facing economic hardships due to COVID-19, including farmers.

USDA had access to an estimated $6.5 billion in available CCC funds in the spring. Congress also said USDA could draw an additional $14 billion in CCC funds in July to help farmers cope with COVID-19 – essentially tapping in to money USDA normally could not obtain until fall, according to farm economists.

Lawmakers specifically assigned the non-CCC money to the USDA Office of the Secretary run by Perdue.

USDA said it also moved the $6.5 billion from CCC into the account, and is doing so with the new CCC funding. The agency said it has internal accounting measures in place to ensure CCC funds do not go to tobacco farmers.

Health advocates said the money should instead go toward efforts to prevent smoking, which the U.S. Centers for Disease Control and Prevention says may increase the risk of severe illness from COVID-19.

“It is particularly troubling that in the midst of this pandemic … the federal government would do more to promote tobacco as opposed to helping smokers quit,” said Erika Sward, national assistant vice president of advocacy for the American Lung Association.