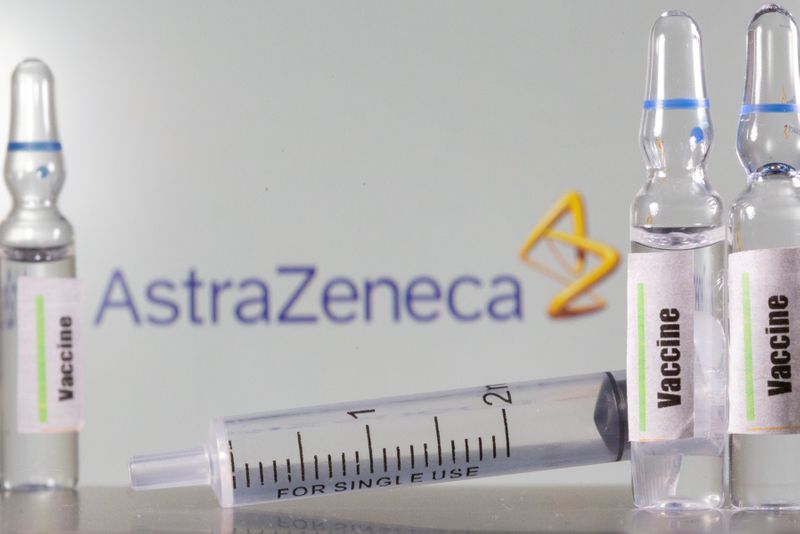 © Reuters. FILE PHOTO: A test tube labelled with the Vaccine is seen in front of AstraZeneca logo in this illustration taken

By Julie Steenhuysen and Marisa Taylor

CHICAGO/WASHINGTON (Reuters) – AstraZeneca (NYSE:) Plc’s COVID-19 vaccine trial in the United States is expected to resume as early as this week after the U.S. Food and Drug Administration completed its review of a serious illness, four sources told Reuters.

AstraZeneca’s large, late-stage U.S. trial has been on hold since Sept. 6, after a participant in the company’s UK trial fell ill with what was suspected to be a rare spinal inflammatory disorder called transverse myelitis.

The sources, who were briefed on the matter but asked to remain anonymous, said they have been told the trial could resume later this week. It was unclear how the FDA would characterize the illness, they said.

The FDA did not respond to a request for comment.

The agency is requiring researchers conducting the trial to add information about the incident to consent forms signed by study participants, according to one of the sources.

UK regulatory officials previously reviewed the illness and determined there was “insufficient evidence to say for certain” that it was or was not related to the vaccine. It permitted the trial to resume enrolling participants in the UK, according to a draft of the updated consent form shared with Reuters.

“In this case, after considering the information, the independent reviewers and MHRA (Medicines and Healthcare products Regulatory Agency) recommended that vaccinations should continue,” the draft consent form stated. “Close monitoring of the affected individual and other participants will be continued.”

Responding to a request, British regulators shared with Reuters a draft of a form letter to UK vaccine trial participants, dated Oct. 14 and signed by the Oxford COVID-19 Vaccine Team. It says the U.S. FDA had “completed their analysis” and said vaccination in the United States would resume shortly.

FDA “has come to the same conclusion as the other drug regulators including the MHRA,” the letter states. The regulator, Health Research Authority, did not say if the letter had been sent or immediately respond to questions about it.

An AstraZeneca spokeswoman said the communication is not from the company and it “cannot verify the content,” referring to the draft letter to patients.

“We also cannot comment on a pending FDA decision,” she said.