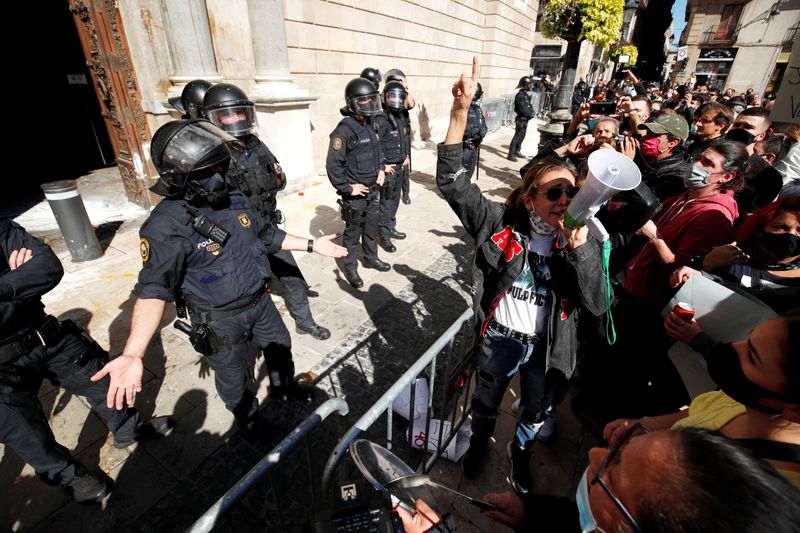 © Reuters. Members of the hospitality sector hold protest in Barcelona

BARCELONA (Reuters) – Banging pots and pans, some 1,000 hospitality workers rallied in Barcelona’s Old City on Friday to protest against a 15-day shutdown of bars and restaurants ordered by the Catalan regional government to contain a surge in COVID-19 infections in Spain.

“After all we’ve had to endure over the past months this really is the final slaughter,” said David Polo, one of the protesters who owns a restaurant called Iberia.

The protesters, some carrying flags proclaiming “young people have a right to work”, converged in front of the regional government headquarters in the historic Sant Jaume square, while some threw eggs at the neighbouring city hall.

Under the new restrictions, reminiscent of a nationwide lockdown in March-June, bars and restaurants across the wealthy northeastern region popular with tourists may only offer take-away and delivery services until at least Oct. 30.

“It’s shameful … The people in charge do whatever they want and us business owners have to foot the bill,” Polo said.

One man dressed as a giant panda held a banner that read: “In danger of extinction. Pandas and hospitality workers united by a cause.”

Catalan hospitality association Fecasarm said the shutdown would hit some 30,000 establishments, causing losses of up to 1 billion euros.

Without government support it estimates half of Catalonia’s restaurants could be bankrupt by the end of the year.

With 22,115 cases diagnosed in the past 14 days, Catalonia is Spain’s second-worst affected region after Madrid.

The nationwide infection tally jumped by 15,186 to 936,560, health ministry data showed on Friday, accelerating slightly from the previous day’s increase.

While the death rate remains far below the peak of nearly 900 reached in early April, hospitalisations and severe cases are on the rise.

“It’s one of the indicators that things are not evolving favourably.”

Health Minister Salvador Illa warned on RAC1 radio the situation was unlikely to improve significantly in the next two weeks.