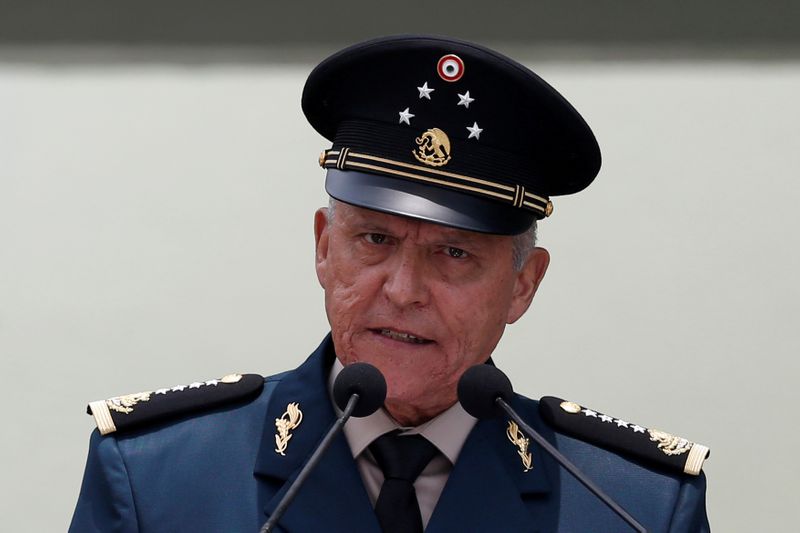 © Reuters. FILE PHOTO: Mexico’s Defense Minister General Salvador Cienfuegos addresses the audience during the 50th anniversary of the Plan of Assistance to the Population in case of Disaster (Plan DN-III-E) in Mexico City

WASHINGTON (Reuters) – The U.S. Department of Justice (DOJ) said it is “deeply disappointed” by Mexico’s decision to close its investigation of ex-Defense Minister Salvador Cienfuegos, after the Mexican attorney general decided to not press charges.

A DOJ spokesperson said late on Friday that the department “fully stands by its investigation and charges in this matter.”

Cienfuegos, who was minister from 2012 to 2018 during the government of former President Enrique Pena Nieto, was arrested in October at Los Angeles airport on charges he worked with a powerful drug cartel.

U.S. prosecutors later dropped the case and returned him to Mexico to be prosecuted, with Lopez Obrador’s administration vowing a thorough investigation of the case.

But on Thursday, less than two months after his return from the United States, Mexico’s attorney general office concluded that Cienfuegos had no contact with members of the criminal organization and said it will not pursue criminal charges.

Then on Friday, on Lopez Obrador’s instructions, the foreign ministry published a 751-page document showing the U.S. evidence against Cienfuegos, including detailed logs of alleged Blackberry (TSX:) communications.

The DOJ said is also “deeply disappointed” the decision to publicize information shared with Mexico in confidence.

“Publicizing such information violates the Treaty on Mutual Legal Assistance between Mexico and the United States, and calls into question whether the United States can continue to share information to support Mexico’s own criminal investigations,” said the DOJ spokesperson.

The DOJ said the documents released in fact showed the case against Cienfuegos was not fabricated and that the information was lawfully gathered in the United States through a proper U.S. court order and in full respect of Mexico’s sovereignty.

“A U.S. federal grand jury analyzed that material and other evidence and concluded that criminal charges against Cienfuegos were supported by the evidence.”