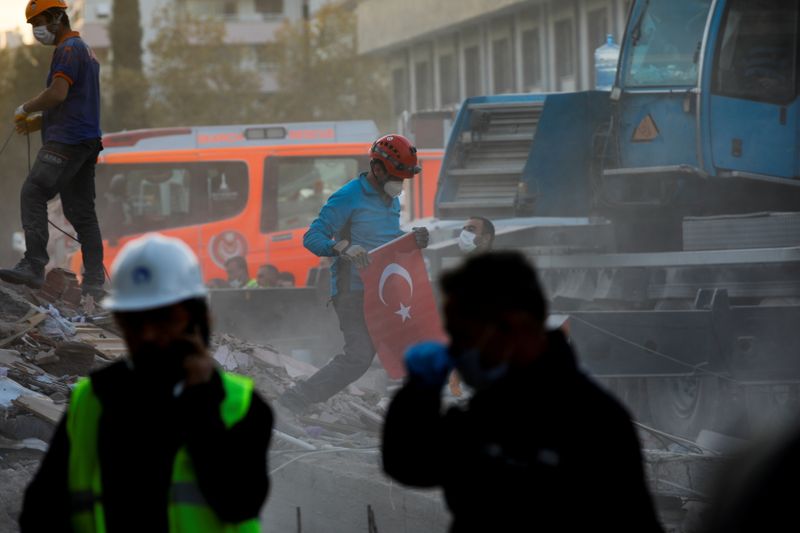 © Reuters. Rescue operations take place on a site after an earthquake struck the Aegean Sea, in the coastal province of Izmir

ISTANBUL (Reuters) – The death toll from Friday’s earthquake in the Aegean Sea has reached 100, with the deaths of 98 people in Turkey’s western city of Izmir, disaster authorities said.

Two teenagers also died on the Greek island of Samos, authorities said. It was the deadliest quake to hit Turkey in nearly a decade.

The quake injured 994 people in Izmir, with 147 still being treated, the Disaster and Emergency Management Authority (AFAD) said on Tuesday, adding that rescuers were still combing five buildings in the search effort.

More than 3,500 tents and 13,000 beds are being used for temporary shelters in Turkey, where relief efforts have drawn in nearly 8,000 personnel and 25 rescue dogs, the agency said.

Turkey is crossed by fault lines and is prone to earthquakes. More than 500 people were killed in a 2011 quake in the eastern city of Van, while another in January this year killed 41 people in the eastern province of Elazig.

In 1999, two powerful quakes killed 18,000 people in northwestern Turkey. AFAD said Friday’s earthquake had a magnitude of 6.6, with some 1,400 aftershocks.