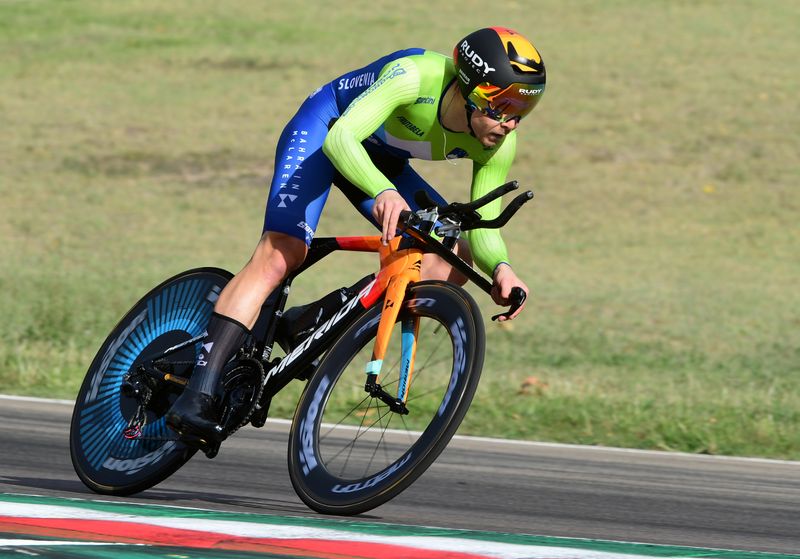 (Reuters) – Team Bahrain McLaren’s Jan Tratnik edged past Ben O’Connor in a two-man finish on Tuesday to win the 16th stage of the Giro d’Italia, a 229km hilly route from Udine to San Daniele del Friuli.

A chase group including Ineos Grenadiers rider Ben Swift threatened to haul in solo leader Tratnik but only NTT Pro Cycling’s O’Connor was strong enough to set up an exciting finish with 12km remaining.

Tratnik held off the Australian rider to secure the biggest race win of his career, finishing with his arms outstretched and tears streaming down his face.

“I attacked so far from the finish and the last climb was very hard,” the 30-year old Slovenian said. “I didn’t think I could do it, but in the end it was a perfect day.

“We are close to the Slovenian border so today my brother and my girlfriend were here… 500 metres from the finish I saw my girlfriend and I found some extra energy that allowed me to win.”

Around 13 minutes adrift of the stage winner, Portuguese Joao Almeida (Deceuninck–Quick-Step) made a late charge on the steep finish to extend his overall race lead to 17 seconds over Sunweb’s Wilco Kelderman.

“I was feeling good and sometimes the best defence is to attack,” said Almeida.

Colombian sprinter Fernando Gaviria withdrew from the race before the start of the stage after becoming the latest rider to test positive for COVID-19.

The Giro continues on Wednesday with stage 17, a 203-km mountain ride from Bassano del Grappa to Madonna di Campiglio.