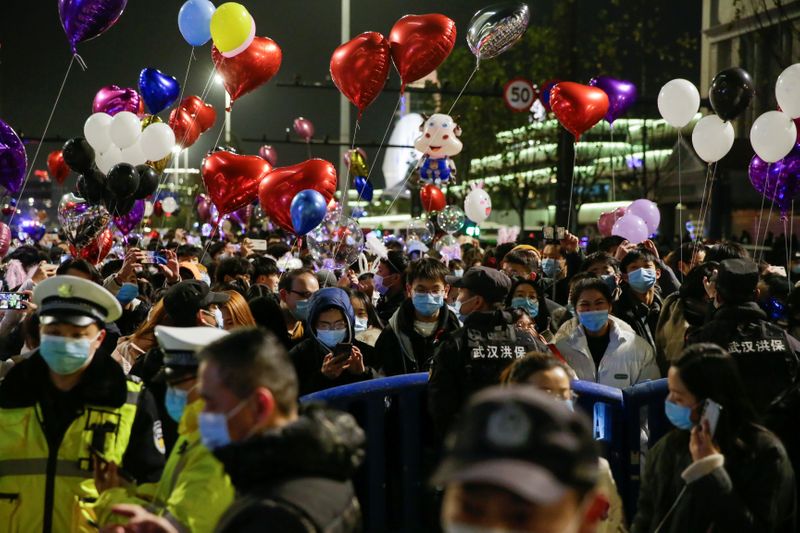 WUHAN, China (Reuters) – Large crowds took to the streets at midnight on Friday in the central Chinese city of Wuhan, celebrating the arrival of 2021 after a year marred by a deadly pandemic that killed thousands there and required the city to be locked down between the end of January and early April.

As per tradition, hundreds gathered in front of the old Hankow Customs House building, one of the city’s more popular New Year’s Eve spots. When the building’s old clock reached midnight many people released balloons into the air, cheered and called out “happy new year”.

“I’m so so so incredibly happy,” said 20-year-old student and tourist Yang Wenxuan. “This is my first time in Wuhan. But it (the countdown) was so spectacular.”

“I hope that I can successfully obtain my bachelor degree and I hope I can find a boyfriend,” Yang added.

There was a heavy police presence and strict crowd control. Some security personnel were seen telling several of the few people without masks that they must put one on if they wished to stay. Still, the countdown appeared to proceed peacefully, in a relaxed atmosphere.

The festivities came 12 months after the World Health Organization (WHO) said it first received word of cases of a pneumonia of an unknown cause in Wuhan, which later became known as the world’s first outbreak of COVID-19. A team of WHO experts is scheduled to arrive in China in January 2021 to investigate the origins of the pandemic.

Wuhan has been largely virus free for months, and in recent days it has been vaccinating some specific groups of the local population. But a recent small rise in cases in various Chinese cities, including Beijing, has reminded people in Wuhan that the pandemic is not over yet.

“I hope that in 2021 everything goes well in the country and Wuhan can return to normal and I hope that the world can soon defeat the pandemic,” said Wuhan resident Anson Yang.

The 25-year-old ,who works in the international trade sector, said his earnings were hit hard in 2020 and he knows of many businesses in Wuhan who are yet to return to normal trading levels.

Several students yearned for an end to the pandemic so they could get on with in-person studies. One university student, however, drew some positive lessons from the fight against the pandemic.

“If we look at the measures people took, the things people did as part of the epidemic control and the like, a human or friendly touch, something that we would not normally see, was felt by everyone,” said 21-year-old Chen Mengfan.