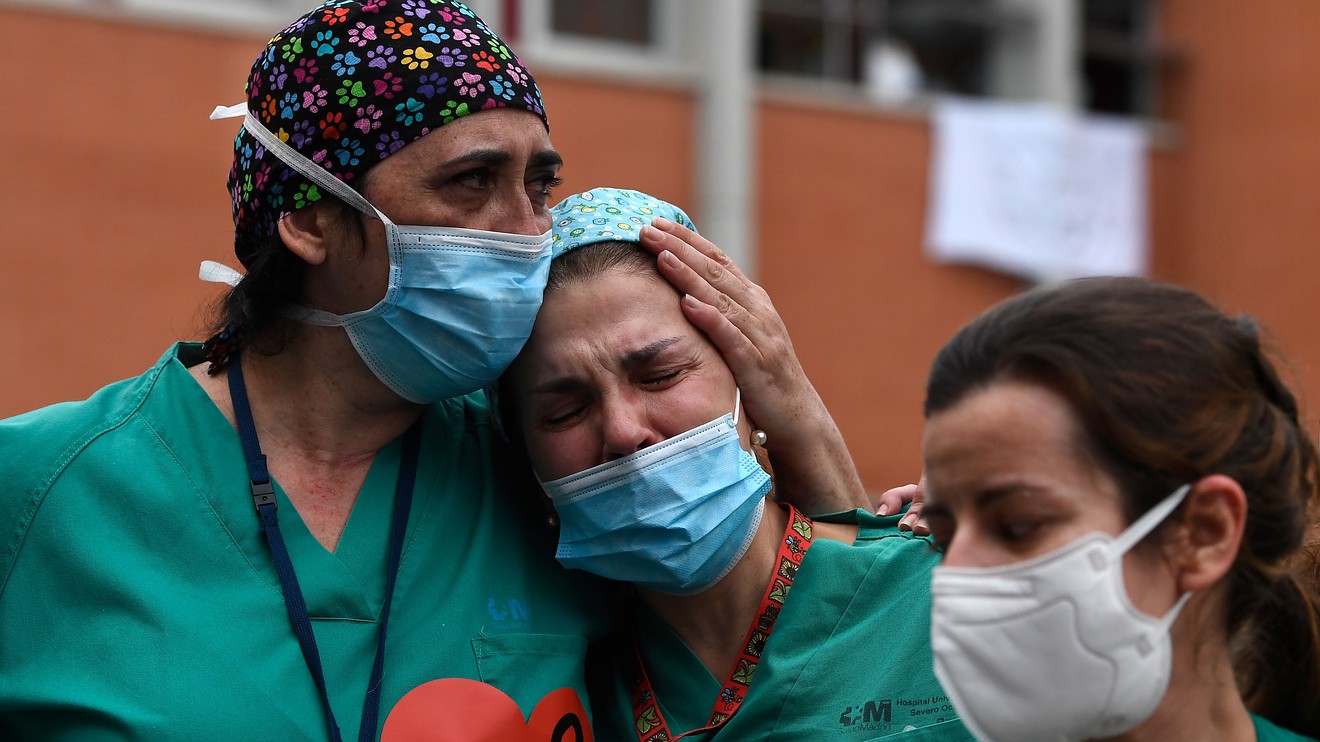 • U.S. averages most deaths in a week since start of crisis

• One in 10 residents of North Dakota has contracted virus

• Fauci warns January could be worse if Americans travel for Christmas, Hanukkah

The U.S. has set another grim milestone in the coronavirus pandemic, averaging the most deaths from COVID-19 in a week since the start of the outbreak, as cases continue to rise across the country and hospitals fill with patients.

There were a record of 102,148 COVID-19 patients in U.S. hospitals on Monday, according to the COVID Tracking Project, topping Sunday’s record of 101,501. Hospitalizations held below 60,000 during the early wave of the pandemic in spring, but have exceeded 100,000 for the past six days.

The virus is racing across Midwest states, led by the Dakotas, Iowa, Wisconsin and Nebraska. In North Dakota, one in 10 residents have contracted COVID-19, the most per capita in the nation.

Early hot spots, including New York, which succeeded in containing the first wave in the spring, are now seeing flare-ups and Gov. Andrew Cuomo said indoor dining in New York City could shut back down as soon as next Monday.

In the rest of the state, indoor dining could be reduced from 50% capacity to 25%.

“You cannot overwhelm your hospitals,” Cuomo said. “If you start to do that, you must shut down. Not just indoor dining but all but essential businesses.”

Read: As New York City reopens classrooms, parents and teachers across the country are frustrated about indecision on in-person learning

“
“Scientific evidence is not the experience or intuition of one physician, or even a collection of individual experiences. Rather, it emerges from the concerted work of thousands of clinicians and scientists conducting research as they treat patients, using clear, reliable methods that minimize bias, analyzing facts and data in a rigorous way, and using standardized tools to verify findings.”
”

The U.S. is still bracing for an expected sharp increase in new cases following the Thanksgiving holiday, when millions of Americans traveled to see family. That spike is expected to happen right before the Christmas, Hankukkah “potential surge,” according to Dr. Anthony Fauci, head of the National Institute for Allergies and Infectious Diseases.

Fauci said in several interviews on Monday that the coming holiday season could be more lethal than Thanksgiving because it’s longer. “We could start to see things start to get really bad in the middle of January, not only for New York state but for any state or city,” Fauci told Gov. Cuomo in a video stream during Cuomo’s daily news briefing. That, “could be a really dark time for us.”

Tempering the bad news was optimism about the Pfizer Inc.
PFE,

vaccine, which the U.K. started to administer to high-risk groups on Tuesday, starting with a 90-year old woman. The U.K. became the first western country to grant emergency use authorization (EUA) to the vaccine, which has performed well in early analyses of data from a late-stage trial. The U.K. has the highest death toll from COVID-19 in Europe and sixth highest case tally in the world, according to data aggregated by Johns Hopkins University.

A U.S. Food and Drug Administration’s advisory committee will meet on Thursday to review an EUA for that vaccine, which could come shortly after. The FDA released an initial report on the vaccine ahead of Thursday’s meeting that said the vaccine has a “favorable safety profile,” but there are still unknowns including how long it offers protection and how it will work on children and the immunocompromised.

There was controversy on Monday when the New York Times reported that the U.S. Operation Warp Speed program set up to accelerate vaccine development declined a Pfizer recommendation that it purchase 200 million doses of the vaccine, and instead purchased just 100 million doses. Pfizer said it would be unable to supply more doses before June, because of commitments it has made to other countries.

Officials from incumbent President Donald Trump’s administration denied the report and said the administration expects to have enough doses to vaccinate all Americans who want one before the end of next year’s second quarter.

and Pfizer will not participate in a vaccine summit planned for Tuesday. Pfizer and Moderna rejected invitations to the summit from President Trump, according to a STAT News report on Monday. The report added that drug-industry figures viewed the event as a public-relations stunt.

Meanwhile, a group of doctors and scientists united in a statement released ahead of a Senate hearing on vaccines sponsored by the Senate Homeland Security and Governmental Affairs Committee, at which a prominent anti-vaxer is to appear. Dr. Jane M. Orient, executive director of the Association of American Physicians and Surgeons, has called vaccine mandates a breach of individual liberty.

Experts, led by Dr. Ashish K. Jha, dean and professor of health services, policy and practice at Brown University of Public Health, signed a statement urging leaders to follow the science and stop the misinformation that has undermined the U.S. response to the crisis.

“Scientific evidence must continue to be the fundamental force driving progress in medical care, even during a pandemic,” said the statement. “Scientific evidence is not the experience or intuition of one physician, or even a collection of individual experiences. Rather, it emerges from the concerted work of thousands of clinicians and scientists conducting research as they treat patients, using clear, reliable methods that minimize bias, analyzing facts and data in a rigorous way, and using standardized tools to verify findings.”

• The World Health Organization does not expect COVID-19 vaccines to be made mandatory around the world, calling instead for information campaigns and making them available to high-risk groups first, Reuters reported. “I don’t think we envisage any countries creating a mandate for vaccinations,” Kate O’Brien, WHO’s director of immunization vaccines and biologicals, told a news conference. “There may be some countries or some situations in countries where professional circumstances require it or highly recommend to be vaccinated,” she added, saying hospitals might be one such instance.

• Florida police raided the home of Rebekah Jones with guns drawn on Monday, searching for her computer, phone and other hardware that supports the coronavirus website the former health department employee created after she was fired this summer, the Washington Post reported. Jones has accused the state of manipulating its official COVID numbers and said she refused to comply with agency requests that she deemed unethical. Police allege that Jones may have used her devices to hack into a health department website and to send unauthorized message to emergency personnel. She has denied the charges.

• Hong Kong’s leader Carrie Lam has unveiled new restrictions aimed at containing COVID-19, including a ban on eating indoors in restaurants after 6 p.m. and the closure of gyms and beauty parlors, the South China Morning Post reported. Lam said the current fourth wave that Hong Kong is experiencing is “very worrying” and urged residents to work from home where possible. Hong Kong has had 6,975 confirmed cases of COVID-19 and at least 112 people have died.

• Four lions at Barcelona’s zoo have tested positive for COVID-19, the Guardian reported. The four, three females and a male, were tested after keepers noticed they showed symptoms. Two staff at the zoo also tested positive, veterinary authorities reported. They are now investigating how the lions became infected, in what is only the second known case of large felines contracting the virus.

Read also:Leading epidemiologist on why the virus has spread in a ‘surprisingly enduring’ way in Italy, and how Germany managed lower deaths

The number of confirmed cases of COVID-19 worldwide climbed above 67.7 million on Tuesday, the Johns Hopkins data show, and the death toll is 1.55 million. At least 43.6 million people have recovered from COVID-19.

China, where the virus was first discovered late last year, has had 93,770 confirmed cases and 4,746 deaths, according to its official numbers.

beat earnings estimates for its fiscal first quarter, despite the challenges created by the pandemic. Memphis, Tenn.-based AutoZone’s sales climbed to $3.154 billion from $2.793 billion. “As the COVID-19 global pandemic continues, our primary focus has been and continues to be the health, wellness and safety of our customers and AutoZoners,” Chief Executive Bill Rhodes said in a statement. The company is spending $50 million to offer workers emergency time off and will extend carryover of paid time off for much of the new year. The company opened 39 new stores in the U.S. during the quarter and two in Brazil. AutoZone had 5,924 stores in the U.S. as of Nov. 21, 621 stores in Mexico and 45 stores in Brazil.

reported a fiscal second-quarter profit that fell more than expected, while sales beat forecasts in an “unprecedented environment” created by the pandemic. Sales edged lower to $985 million from $989 million, beating the FactSet consensus of $967.7 million, while cost of sales increased 10% to $404 million. Among the company’s brands and spirits, Jack Daniels family of brands sales fell 3% from a year ago on a reported basis, Tequila sales rose 5%, wine sales grew 15% and vodka sales dropped 15%, while American whiskey sales fell 1% and premium bourbons sales jumped 18%. The stock has advanced 18.9% year to date through Monday,

reiterated its full-year 2020 adjusted profit growth outlook of 11% over 2019 earnings, “despite some softening in demand due COVID-19 restrictions,” and said it expects 2021 adjusted earnings-per-share growth of 20% to 25%. The FactSet consensus for 2020 EPS of $4.41 implied 10.3% growth, and the 2021 EPS consensus of $5.38 implies 22% growth. Also for 2021, the company expects internal revenue growth of 7% to 12%. The payments and financial technology company said its financial outlook “does not assume a significant extension of COVID-19 deep into 2021.”

said the Swiss government has increased its order for Moderna’s COVID-19 vaccine candidate to 7.5 million doses from an original 4.5 million. Moderna is on track to start delivering the vaccine as soon as it gets the nod from Swiss regulators. “Moderna could ship its COVID-19 vaccine as soon as December if regulatory approval is granted this month,’ the company said in a statement. “The company has already initiated the rolling review process with Swissmedic and intends to seek Prequalification (PQ) and/or Emergency Use Listing (EUL) with the World Health Organization (WHO).” A primary efficacy analysis of the Phase 3 study of the vaccine dubbed mRNA-1273 found it had vaccine efficacy of 94.1%.

credit rating is in danger of being downgraded deeper into junk territory by S&P Global Ratings, which cited expectations that the cruise operator’s recovery will take longer than previously projected. The company’s issuer credit rating of B+, which is four notches below investment grade territory, was put on CreditWatch with negative implications, as Royal’s recently extended suspension of cruises through February is beyond S&P Global’s assumptions, which was for operations to resume in a phased manner starting in the fourth quarter. “Accordingly, we expects Royal to burn more cash relative to our previous expectations and for leverage to remain very high in 2021,” S&P Global said.