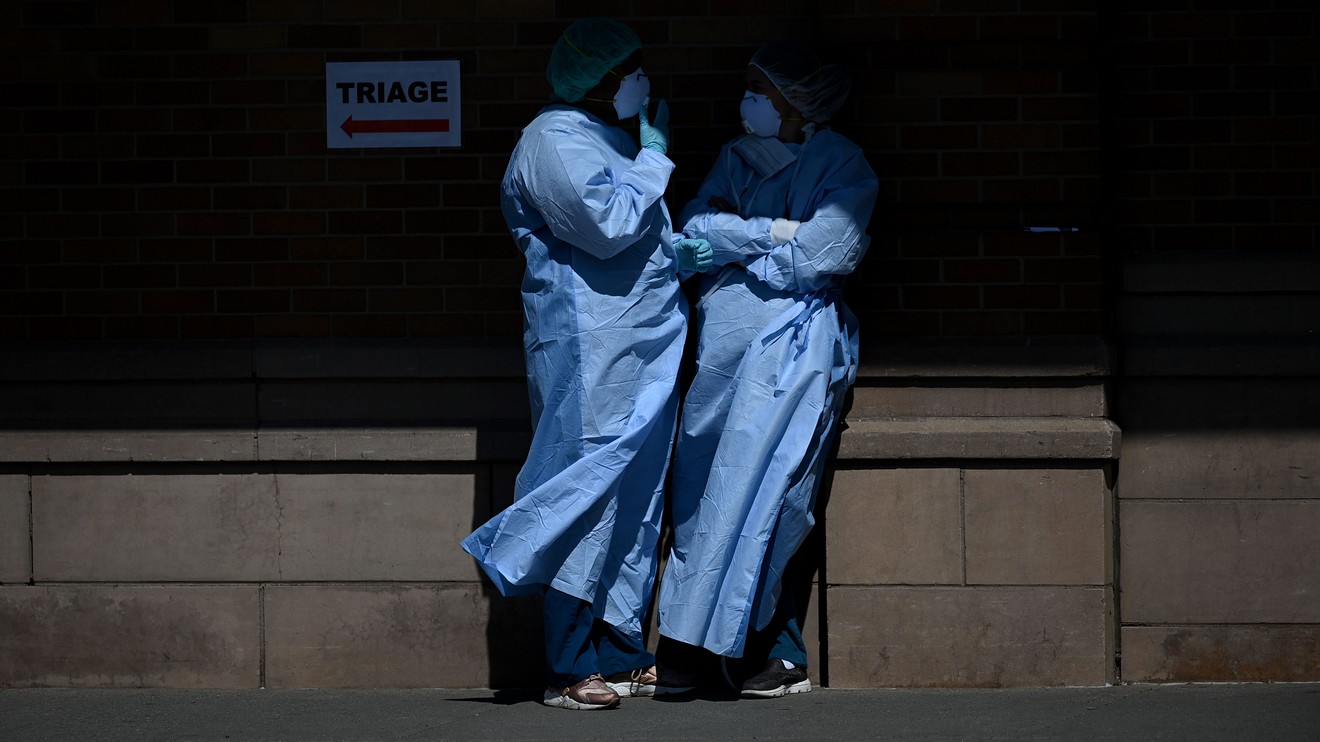 The number of confirmed cases of the coronavirus that causes the disease COVID-19 rose to 33.4 million on Tuesday, a day after the global death toll reached 1 million, as governments around the world moved to reimpose restrictions on movement in a fight to contain the spread.

Governments across Europe are grappling with rising infections, including in countries like Germany that appeared to have the crisis under control months ago, and some, including Italy, France and the U.K., are considering or have imposed new emergency measures. South America, parts of Asia and the Middle East are still counting thousands of new cases a day with no sign the virus’s spread is slowing, according to data aggregated by Johns Hopkins University, a global benchmark for tracking the virus.

Dr. Michael Ryan, head of the World Health Organization’s emergencies program, said Monday the true toll from COVID-19 likely exceeds 1 million. Experts have cautioned that there are discrepancies between how data are collected and reported in different countries.

“When you count anything, you never count it perfectly,” Ryan told reporters at a press briefing in Geneva. “But I can assure you that the current numbers are likely an underestimate of the true toll of COVID.”

The U.S., which accounts for just 4% of the world’s population, continues to lead in case numbers and fatalities, with 7.2 million confirmed cases and 205,091 deaths, a fifth of the global total. Experts have said the numbers would be lower if the U.S. had stuck with a consistent approach to the pandemic from the outset, and implemented the wide-scale testing, contact tracing and isolation of infected patients, quarantining, social distancing and face-mask wearing, that have proven effective in those places that have got the outbreak under control.

United Nations Secretary-General António Guterres said the challenge can be overcome, but the world must learn from its mistakes.

“Responsible leadership matters. Science matters. Cooperation matters — and misinformation kills,” he said in a statement on Monday. “As the relentless hunt for a vaccine continues — a vaccine that must be available and affordable to all — let’s do our part to save lives.”

Senior White House officials pressed the Centers for Disease Control and Prevention to play down the risks of sending children back to school, and sought alternate data that would show the pandemic was unlikely to harm them, according to a New York Times report published Tuesday.

Citing documents, as well as interviews with former and current officials, the newspaper report said the pressure on the nation’s leading public health agency came during the summer months, at a time when parental anxiety about sending children back into classrooms was nearing a peak.

One member of Vice President Mike Pence’s staff told the paper she was repeatedly asked by Marc Short, Pence’s chief of staff, to produce more reports and charts showing cases involving young people were declining. The aide, Olivia Troye, has since resigned.

The Margin:Challenge coin features as ex–Pence adviser Olivia Troye rebuts Keith Kellogg’s story of her being fired and marched out of White House

Dr. Deborah Birx, lead coordinator of the White House task force created to manage the pandemic, pressured the CDC to include a document from a mental-health agency at the Department of Health and Human Services that said school closures would have a long-term effect on the mental health of school children and that those who were not showing symptoms were unlikely to cause spread, the report said.

It comes just hours before President Donald Trump is to debate his presidential rival, Democrat Joe Biden, with the pandemic expected to take center stage, ahead even of the scandal involving Trump’s tax record on which the New York Times reported over the weekend, with a second installment out Tuesday.

Those comments came after an NBC report that CDC head Robert Redfield had been overheard during a phone conversation on a plane saying of Atlas: “Everything he says is false.” Atlas, a radiologist who has no infectious-disease experience, was added to the task force in August, after regular appearances on Fox News, where he shared views that aligned with those espoused by Trump.

Altas has pushed for states to reopen aggressively, played down the need for face masks and said children are not in danger from the virus. He has supported the development of herd immunity — which could kill millions of Americans. A number of members of the medical faculty at Stanford — where Atlas is a Hoover fellow — recently signed an open letter condemning Atlas, saying his comments run counter to scientific evidence and undermine public health efforts.

• New Zealand counted a fourth day with no community transmission on Tuesday, according to local media reports. There are just 18 active cases in the country, all of whom are isolated or in quarantine. New Zealand was widely praised for its initial handling of the pandemic, which has helped it keep cases and deaths to a minimum. The country has 1,835 confirmed cases and 25 deaths, according to Johns Hopkins data.

• Mexico increased its estimated COVID-19 death toll to 89,612 on Monday, and raised its case tally to 870,699, or about 137,000 more than previously estimated, the Associated Press reported. That’s after previous estimates that were based on test results that had not yet arrived. Officials also added two new groups: those who were never tested but showed symptoms, and those who had tests that could not be analyzed because they were not handled properly, the AP reported.

in “the coming weeks.” Speaking at the White House, Trump said 100 million of the tests would go to states and territories to support efforts to allow schools to reopen, while 50 million would go to nursing homes, hospice facilities and other institutions that serve the most vulnerable. The White House announced the government’s purchase of the tests from Abbott in late August.

The global death toll from COVID-19 stands at 1.002 million, according to the Johns Hopkins data. At least 23.2 million people have recovered.

Brazil has the second highest death toll after the U.S. at 142,058, but third highest case tally at 4.7 million.

China, where the illness was first reported late last year, has 90,509 cases and 4,739 deaths, according to its official numbers.

Consumer confidence rebounded in September to a pandemic-era high after the number of coronavirus cases declined and the economy marched ahead, a closely followed survey showed, as MarketWatch’s Jeffry Bartash reported.

The index of consumer confidence rose to 101.8 this month from 86.3 in August, the Conference Board said Tuesday. Economists polled by MarketWatch had forecast the index would rise to 89.6.

The level of confidence in August was also revised slightly higher after initially showing the lowest reading since the pandemic began more than six months ago.

The spring-back in consumer confidence after two straight declines is welcome news, suggesting a U.S. recovery is still on track even if growth has tapered off since the late spring. Although millions of Americans remain out of work, more people are returning to their jobs and the unemployment rate has shown declines.

Economists worry the end of federal aid will slow the recovery and make it harder to return to normal, but so far the U.S. has continued to plow ahead.

“A more favorable view of current business and labor-market conditions, coupled with renewed optimism about the short-term outlook, helped spur this month’s rebound in confidence,” said Lynn Franco, senior director of economic indicators at the Conference Board.

Separately, the U.S. trade deficit in goods rose 3.5% in August to a record $82.9 billion, reflecting a sluggish rebound in exports that’s weighing on the broader economy and could slow the recovery from the worst levels of the coronavirus-pandemic period.

Economists polled by MarketWatch had forecast a small decline in the trade gap.

expects a big jump in third-quarter same-store sales and guided toward per-share earnings that are well above the consensus. The Columbus, Ohio–based company said it expects same-store sales to rise by a percentage in the mid-teens. Based on that outlook, the company is expecting per-share earnings to range from 50 to 70 cents, compared with a FactSet consensus of 29 cents. The company posted a loss per share of 18 cents in the year-earlier period. Chief Executive Bruce Thorn said the company is on track to meet customer demand, “and early reads on Christmas are very encouraging.” Shares have gained 66% in the year to date, boosted by pandemic-related demand.

said that Kenny K. Cheung, recently promoted to executive vice president of finance, took on the role of chief financial officer last week. Cheung succeeded R. Eric Esper, promoted to CFO in August. Esper resigned to pursue a new opportunity but will remain with Hertz as chief accounting officer until Nov. 1 to assist in the transition. Esper had succeeded Jamere Jackson, who took the CFO reins in August 2018. The car-rental company filed for bankruptcy in May, hit by coronavirus-related travel and business restrictions and under the weight of previous debt. Hertz in June floated a plan to sell potentially worthless stock but later backed off after the proposal drew scrutiny from securities regulators.

posted better-than-expected earnings for its fiscal third quarter, resumed guidance and announced a 2-for-1 stock split, saying it is still benefiting from dining at home during the pandemic. “Our results for the third quarter continued to be significantly impacted by the sustained consumer preference for cooking more at home,” Chief Executive Lawrence Kurzius said in a statement. “Our updated 2020 outlook reflects the strength of these year-to-date results and our confidence in the sustainability of higher at home consumption trends,” he said. The company is now expecting fiscal 2020 sales to grow at the upper end of its up 4% to 5% range. The company expects adjusted per-share earnings to range from $5.64 to $5.72, compared with a current FactSet consensus of $7.75. Its board has approved a 2-for-1 stock split to be conducted on Nov. 20.

systemwide North American comparable sales rose 18.4% in September, bringing the number of consecutive months in which the pizza delivery company reached double-digit sales growth to six. Papa John’s has been providing a monthly business update during the coronavirus due to the uncertainty created by the pandemic. For the three months ending Sept. 27, North American systemwide comparable sales rose 23.8%, while international systemwide sales were up 20.6%. About 90 of 2,100 international Papa John’s franchised locations are closed in accordance with government rules, while nearly all North American locations are open.

beat Wall Street expectations for its fourth fiscal quarter but it is losing its CEO. United Natural Foods said that Chief Executive Steven L. Spinner is to retire after July 31, when his employment contract expires, or earlier if a successor is found. United Foods reported better-than-expected fourth-quarter results, pinning that on “strong customer demand as well as the benefits from cross selling.” United Foods said it earned $52 million, or 89 cents a share, in the quarter, compared with 36 cents a share in the year-ago period. Adjusted for one-time items, the company earned $1.06 a share. Sales rose 0.4% to $6.75 billion. Analysts polled by FactSet had expected adjusted profit of 74 cents a share on sales of $6.6 billion for the quarter. It forecast “continued momentum” next fiscal year, saying that “food-at-home consumption remains elevated” due to the pandemic. It guided for fiscal 2021 sales between $27 billion and $27.8 billion, and adjusted EPS between $3.05 and $3.55.