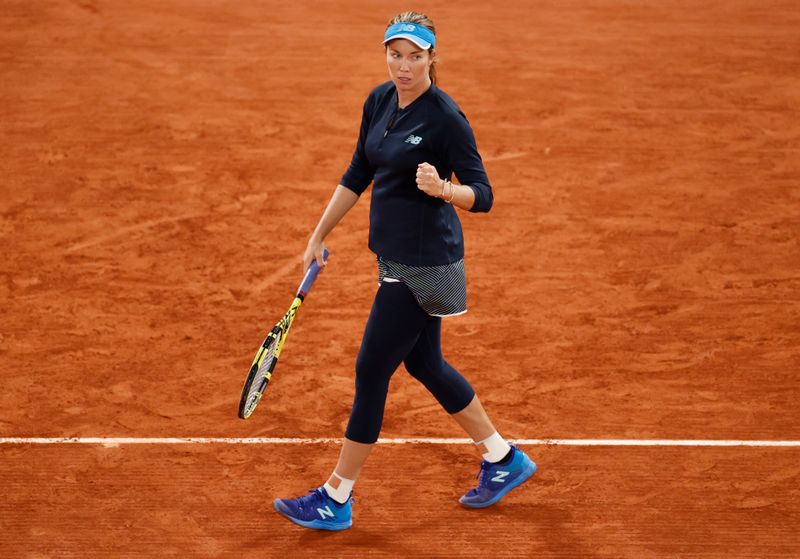 PARIS (Reuters) – American Danielle Collins threw the kitchen sink at former champion Garbine Muguruza to force her way into the fourth round of the French Open with a 7-5 2-6 6-4 victory on Saturday.

Collins, who has very little experience on clay, was 3-0 down in the decider but battled through to set up a meeting with Tunisian Ons Jabeur, the first Arab woman to reach the last 16 at Roland Garros.

“She (Muguruza) was playing some of her best tennis, coming up with incredible shots and there wasn’t much I could do so I rolled with the punches and hung in there,” said the 26-year-old Collins.

“Honestly I don’t have a lot of experience playing on clay – I didn’t play on claycourts for a couple of years – so it took a while to get acclimatised.

“When I went to college, I played only on hard courts, I was just competing, practising always on hard courts. When I turned professional I realised I would have to play on clay and I didn’t have the best results.”

Muguruza, who lifted the Suzanne Lenglen Cup in 2016, seemed to be in control after losing the opening set, having missed seven of eight break opportunities, but she eventually crumbled under Collins’ punches.

The match started on court Suzanne Lenglen but was suspended by rain after one game before being moved under the roof of court Philippe Chatrier.

Collins, playing in the third round here for the first time, played aggressively from the onset, her winners making up for a string of unforced errors.

Muguruza had eight break points in the first set but converted only one while her opponent, whose best results have come on hard courts, converted two of three.

She continued to play neatly and seized her opportunities this time, breaking twice to go 5-1 up in the second set.

Muguruza’s counter-punching became too hard to handle for Collins, who dropped serve twice early in the decider as the Spaniard raced into a 3-0 lead.

But Collins pulled one break back, then two to level for 4-4. She won the next game to love and wrapped it up on her first match point when Muguruza could only return one of her opponent’s massive forehands wide.