‘Choose – I kill you or rape you’: abuse accusations surge in Ethiopia’s war 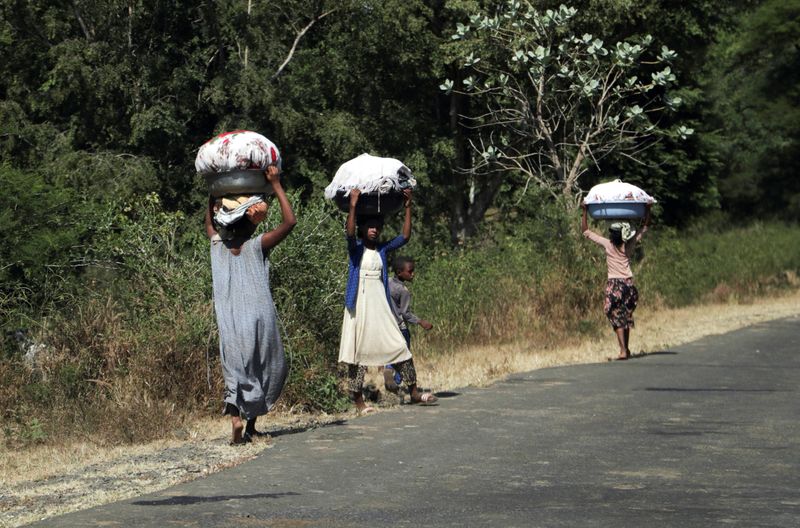 HAMDAYET, Sudan (Reuters) – The young coffee seller said she was split from family and friends by an Ethiopian soldier at the Tekeze river, taken down a path, and given a harrowing choice.

“He said: ‘Choose, either I kill you or rape you’,” the 25-year-old told Reuters at the Hamdayet refugee camp in Sudan where she had fled from conflict in Ethiopia’s Tigray region.

The doctor who treated her when she arrived at the camp in December, Tewadrous Tefera Limeuh, confirmed to Reuters that he provided pills to stop pregnancy and sexually-transmitted diseases, and guided her to a psychotherapist.

“The soldier … forced a gun on her and raped her,” Limeuh, who was volunteering with the Sudanese Red Crescent, said the woman told him. “She asked him if he had a condom and he said ‘why would I need a condom?'”

Five aid workers for international and Ethiopian aid groups said they had received multiple similar reports of abuse in Tigray. The United Nations appealed this week for an end to sexual assaults in the region.

Among a “high number” of allegations, particularly disturbing reports have emerged of people being forced to rape relatives or have sex in exchange for basic supplies, the U.N. Office of the Special Representative on Sexual Violence in Conflict said in a statement on Thursday.

Prime Minister Abiy Ahmed’s government and the military did not immediately respond to questions from Reuters about the reports of rape. Ethiopian authorities have previously denied rights abuses, pointing the finger instead at the Tigray People’s Liberation Front (TPLF), the region’s former ruling party whose forces they accuse of insurrection.

“I call on all parties involved in the hostilities in the Tigray region to commit to a zero-tolerance policy for crimes of sexual violence,” U.N. special representative Geraldine Boezio said in the statement.

Women and girls in refugee camps within Ethiopia appear to have been particularly targeted, and medical centres are under pressure for emergency contraception and tests for sexually-transmitted infections, the statement said.

Reuters could not independently verify the accounts of rape. Media have been largely banned from Tigray, aid agencies have struggled for access, and communications were down for weeks.

The 25-year-old woman who spoke with Reuters said her abuser wore an Ethiopian federal army uniform.

The five aid workers said other women described their alleged assailants as being militia fighters from Ethiopia’s Amhara region or Eritrean soldiers, both allied with Abiy’s troops. Reuters was unable to determine the identity of the woman’s assailant.

Abiy’s spokeswoman, Tigray’s interim governor, the mayor of the regional capital Mekelle, Eritrea’s foreign minister and Ethiopia’s army spokesman did not immediately reply to requests for comment on rape allegations. Reuters could not reach TPLF representatives.

“I don’t have any information about that,” Amhara regional spokesman Gizachew Muluneh told Reuters by phone.

Ethiopia and Eritrea have both denied that Eritrean troops are in Ethiopia, contradicting dozens of eyewitness interviews, diplomats and an Ethiopian general.

At a meeting of security officials in Mekelle broadcast on Ethiopian state TV earlier this month, one soldier spoke of abuses even after the city had been captured by federal forces.

“I was angry yesterday. Why does a woman get raped in Mekelle city? It wouldn’t be shocking if it happened during the war … But women were raped yesterday and today when the local police and federal police are around,” said the soldier, who was not identified.

Local authorities did not immediately respond to efforts to seek comment on whether any soldiers might be investigated or brought to justice.

Tewadrous, the refugee camp doctor, described two other rape cases he had handled. One woman, who said she had escaped from Rawyan town in Tigray, told of three soldiers she identified as Amhara special forces knocking at her door, the doctor said. When she refused them entry, they broke in and assaulted her.

An aid worker in the town of Wukro told Reuters victims had recounted how a husband was forced to kneel and watch while his wife was raped by soldiers they identified as Eritrean.

A medical worker in Adigrat said he treated six women who had been raped by a group of soldiers and told not to seek help afterwards. They found courage to come forward days later, but there were no medicines to treat them, the medic said.

In Mekelle, one man was beaten up after begging soldiers to stop raping a 19-year-old, according to a medical worker who treated both victims. Mekelle charity Elshadai said it has prepared 50 beds for rape victims.