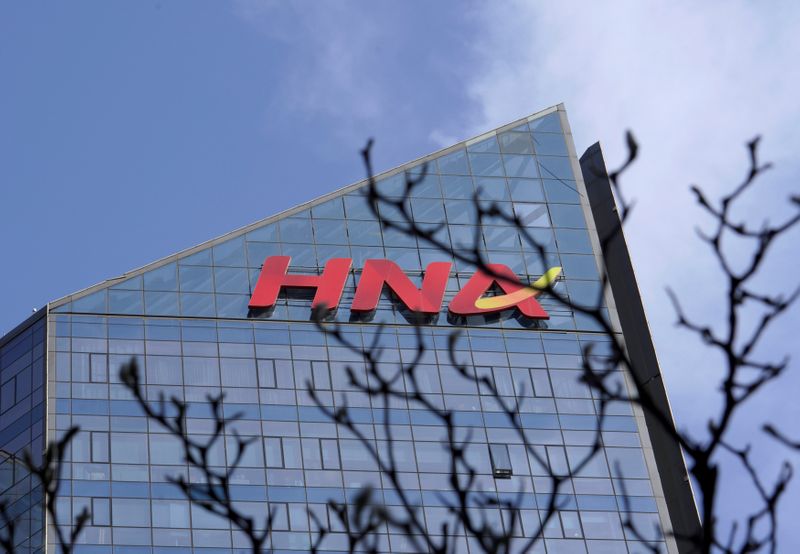 © Reuters. FILE PHOTO: A HNA Group logo is seen on the building of HNA Plaza in Beijing

By Kane Wu and Brenda Goh

HONG KONG/SHANGHAI (Reuters) – Shares in listed companies linked to China’s HNA Group slumped on Monday, after the troubled conglomerate disclosed that its creditors had applied for its bankruptcy and that nearly $10 billion had been embezzled by shareholders of its three units.

The move to file for bankruptcy came after the group was put under a restructuring exercise led by the Hainan government to resolve its liquidity risks stemming from years of aggressive acquisitions abroad.

HNA, whose flagship business is Hainan Airlines, used a $50 billion global acquisition spree, mainly fuelled by debt, to build an empire with stakes in businesses from Deutsche Bank (DE:) to Hilton Worldwide.

HNA, once one of China’s most high-flying firms, said late on Friday its creditors had applied to a Hainan court for the company to be placed in bankruptcy and restructured.

Hainan Airlines, HNA Infrastructure and CCOOP on Saturday disclosed a total of $9.6 billion had been embezzled by shareholders and other related parties. It did not give further details on who the shareholders were.

“Fundamentally a bigger but very old story at play – if you expand your biz by borrowing money … you better have the money to pay for all this,” Fraser Howie, an independent commentator and author of books about China’s financial system, said.

Noting China’s past history of acquisitive conglomerates, he said: “Every one of them has been dismembered, dismantled and restricted to varying degrees. That type of companies is gone and not coming back.”

Beijing has been putting more pressure in recent years on opaque corporate structures, excess debt and deals it sees as overly aggressive as it tried to control capital outflows and keep its economy on an even keel.

While the scope of HNA’s restructuring was not immediately clear, some bankers don’t expect a commercial sale process to be launched for its main businesses including Hainan Airlines, which they said were likely to be merged with a state airline.

HNA began selling many of its trophy assets three years ago to focus on its airlines and tourism businesses, after its massive spending drew scrutiny from China’s central government and other overseas regulators.

In recent years, it sold assets such as airport services company Swissport and electronics distributors Ingram Micro. The COVID-19 pandemic, however, put pressure on the airline industry and worsened its liquidity woes.