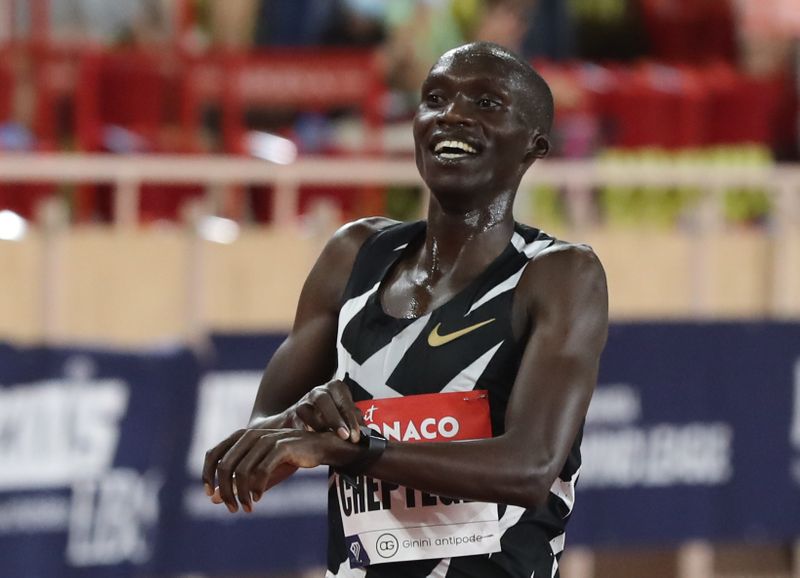 (Reuters) – Ugandan Joshua Cheptegei says he is targeting the 5,000m-10,000m double at the Tokyo Olympics after breaking the world records in both distances this year.

At the Monaco Diamond League meeting two months earlier he had also bettered Bekele’s 16-year-old 5,000m record by almost two seconds with a time of 12:35.36.

If Cheptegei wins gold medals in both events at next year’s postponed Games, he would become only the eighth man to complete the double.

“It would be a mountain to climb, but the challenge is up to me,” Cheptegei told the BBC. “It’s demanding a lot, in terms of racing and mindset but I want to give myself a try to win both gold medals,.

“It would be really amazing to win the double, but if I win gold in the 10,000m I would still be grateful.”

Cheptegei, who runs in Nike (NYSE:)’s Dragonfly spikes — a lightweight shoe that combines a unique foam and carbon plates — said that his gear helped him but was not the reason for his success this year.

A debate over runners’ shoes has been raging since high-tech footwear developed by Nike played a starring role in two of the biggest distance-running achievements of 2019.

“The shoes really do help. But in this case the shoes are not only available to Mr. Cheptegei. They are available for everyone who wants to attack the world record,” he added.

“You have seen the likes of Yomif Kejelcha, Selemon Barega … it’s not about shoes only, but athletes having this period concentrating more on training and not travelling.

“I was focused on just this one thing … that was breaking the world record.”