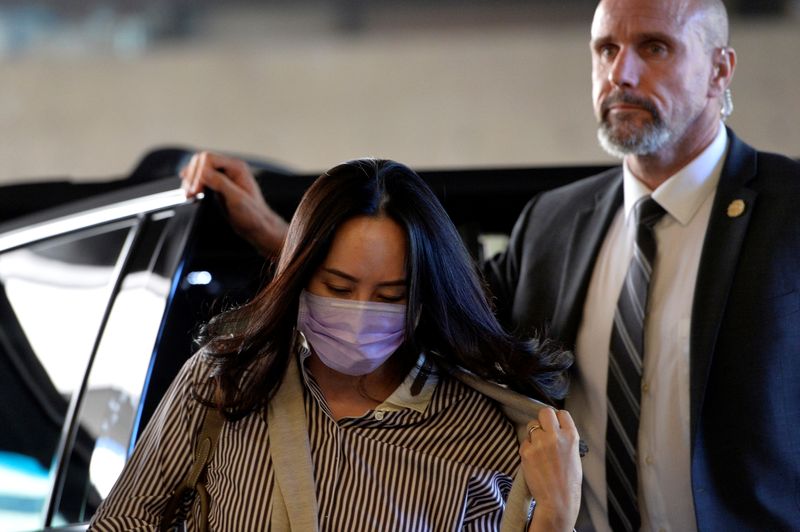 By Moira Warburton and Tessa Vikander

VANCOUVER (Reuters) – Lawyers for the Canadian government asked a judge on Tuesday to keep Huawei Chief Financial Officer Meng Wanzhou’s extradition case to the United States “on the straight and narrow” and described the evidence presented by the defence as inadmissible.

Government lawyer Robert Frater asked the judge to throw out the defence’s arguments and end their effort to add an allegation that the U.S. government had abused the process.

Lawyers for Meng told the court that the United States extradition request to Canada is based on so many “omissions and misrepresentations that it’s unreliable and ineffective.”

Tuesday’s arguments are the latest in a series of hearings in a case that has strained China’s relations with the United States and Canada.

Meng, 48, was arrested in December 2018 on a warrant from the United States charging her with bank fraud for misleading HSBC about Huawei’s business dealings in Iran and causing the bank to break U.S. sanctions law.

The daughter of billionaire Huawei founder Ren Zhengfei, Meng has said she is innocent and is fighting extradition while under house arrest in Vancouver.

Frater said the judge should disregard the defence’s arguments around who knew what at HSBC and accused the defence of attempting to litigate the fraud charges against Meng in the extradition case.

Frater asked the judge to keep the case “on the straight and narrow” and “refuse to spend precious court time on issues that have no hope of success.”

The crux of Meng’s argument is that the United States misrepresented the case when it asked Canadian officials to arrest her.

The United States has used part of a PowerPoint presentation given by Meng to HSBC as proof of fraud, but Meng and her lawyers argue otherwise.

“No banker would leave that meeting thinking that Huawei had distanced itself from Skycom,” Frank Addario, one of Meng’s lawyers, told the court on Tuesday, adding that “HSBC knew what it was getting into.”

The judge must decide whether the defence’s latest allegation is plausible enough to be worth fully litigating.

If the judge rules in Meng’s favor, an additional set of hearings will be added to the case schedule for arguments.

A decision on this issue is expected by Oct. 30.

The hearing is expected to wrap up on Wednesday. Meng’s extradition case is scheduled to finish in April 2021.