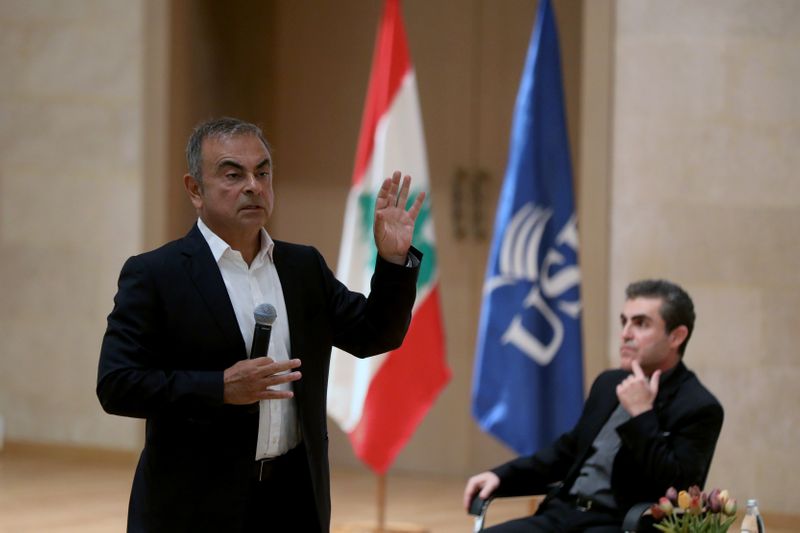 BEIRUT (Reuters) – Carlos Ghosn, the former Nissan (OTC:) and Renault (PA:) head who fled Japan where he was facing trial, is launching a university business programme in Lebanon, a nation mired in a deep economic crisis blamed on years of misrule, mismanagement and corruption.

Nine months after his dramatic escape to Beirut from Tokyo, the Lebanese-French executive has unveiled a plan to shake up the business school at the Université Saint-Esprit de Kaslik (USEK), a private university north of the Lebanese capital.

Ghosn, credited with turning round the Japanese and French carmakers before he faced charges in Japan of financial wrongdoing that he denies, plans programmes to coach executives, offer technology training and help start-ups to create jobs.

Ghosn has found refuge in Lebanon where the economy is collapsing under debts amassed since the 1975-1990 civil war. A devastating blast in Beirut on Aug. 4 compounded Lebanon’s woes.

“Obviously I am not interested in politics but I will dedicate time and effort into supporting Lebanon during this difficult period,” he told Reuters at the weekend, before the formal launch of his new university programme.

At Tuesday’s news conference to announce the programme, he said: “This is about creating jobs, employment and entrepreneurs to allow society to take its role in the reconstruction of the country.”

He said Lebanon’s challenge was “the restoration of confidence” not a lack of assets, saying the state owned infrastructure, land and hydrocarbon resources. Now it needed to execute a recovery plan, he added.

“If you bring back trust, money will come,” he said. “You can have an excellent plan for Lebanon but if you don’t execute it you are not even at starting point.”

Ghosn, who was approached by USEK in the weeks after arriving in Lebanon at the end of December, said the business programme aimed to offer practical help. He will help supervise.

Drawing on his experience, the focus for the executive programme would be turning around companies in trouble, corporations struggling with a troubled environment and how to “make yourself invaluable” in a company.

The short courses, expected to start in March, would be open to 15 to 20 senior executives in Lebanon and the Middle East.

“The role model is my experience, what I think are the basic needs of a top executive in a very competitive environment,” he said, adding that, when he was in charge, Nissan’s executive training programme in Japan had been open to other companies.

The second USEK programme, subsidised by the executive programme, would train people on new technologies, such as computer-assisted design and artificial intelligence.

Ghosn said Lebanon’s jewellery exporters were among those who would benefit from software to help with designs.

The third programme would act as an incubator for start-ups, and he aimed to invest in two projects. “I am mainly interested in projects that have environmental impact,” he said, citing the example of a project to turn sewage into fertiliser.

He said was persuaded to work with USEK by the president of the Maronite Christian institution, Father Talal Hachem, and his young team.

Ghosn said he picked USEK, rather than a bigger Lebanese university, because he liked working with an institution that attracted a broad range of students, not just the wealthy.

“These students need help more than anybody else. This is the class that has been smashed by the situation today,” he told Reuters. “I’m going to help build the economy by helping to solve problems that every Lebanese is facing today.”