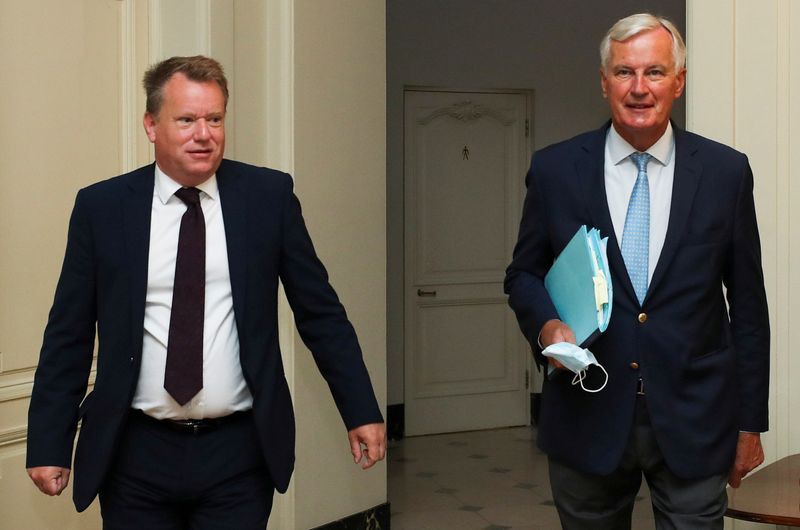 The United Kingdom formally left the EU on Jan. 31, but more than fours years since voting 52%-48% for Brexit in a 2016 referendum, the two sides are haggling over a trade deal that would kick in when informal membership ends on Dec. 31.

The two chief negotiators, Barnier and Britain’s David Frost, say they are inching towards a deal, though they have underscored that important gaps remain on fishing, level playing field issues and governance. Both sides have no-deal plans.

Barnier, who left London on Friday just 12 hours after arriving, wants a few more concessions from Britain before entering the so called “tunnel” – the final stretch of highly secretive, make-or-break negotiations.

“We need to get a little bit more from the UK side before he (Barnier) … is ready to enter the tunnel,” said a senior EU diplomat.

Prime Minister Boris Johnson’s spokesman said some progress had been made but the two sides did not yet see eye to eye on all matters.

“We’ve had useful discussions this week and progress has been made in some areas. However, there still remain differences on some important issues,” the spokesman said.

Johnson has set a deadline of the Oct. 15 EU summit for a deal, and while his top Brexit advisers say that additional work on a text would have to follow, they have warned the EU that they will not do a deal at any price.

As he grapples with a swiftly accelerating second wave of the novel coronavirus outbreak, Johnson will ultimately have to make the final call on whether to accept a narrow trade deal or go for a more tumultuous no-deal that could be blamed on the EU.

He has repeatedly said that his preference is for a deal but that Britain could make a success of a no-deal scenario, which would throw $900 billion in annual bilateral trade into uncertainty and could snarl the border, turning the southeastern county of Kent into a vast truck park.

After Johnson’s bid to undercut the 2020 Brexit divorce treaty, there are fears that London is employing what one European diplomat said was Madman Theory – a reference to former U.S. President Richard Nixon’s attempt to convince Moscow that he was irrational during the Cold War.

“You always need to do contingency planning, I mean the end of the year is approaching rapidly and we still don’t know whether there’s going to be a deal or not,” said the EU diplomat.

“Companies need to prepare, but also in addition they need to prepare for a no deal. But that does not mean that we feel that a deal is impossible – I think it’s still very well possible.”

One emotive trouble spot is fishing.

The EU wants to secure consistent rights to fish in British waters, an important issue for France where coastal fishing communities are politically influential. Britain wants a deal more like that of non-EU member Norway, under which quotas are set each year.

“I do not believe that … this (fisheries stand-off) will be a major impediment to an EU-UK agreement,” the EU diplomat said.

“What I see now is that the UK is, you know, trying to say ‘OK, you know, this is really valuable, it’s a matter of sovereignty’ – but they see it as a lever to gain market access to the European Union. I think that’s the game that we’re seeing right now.”