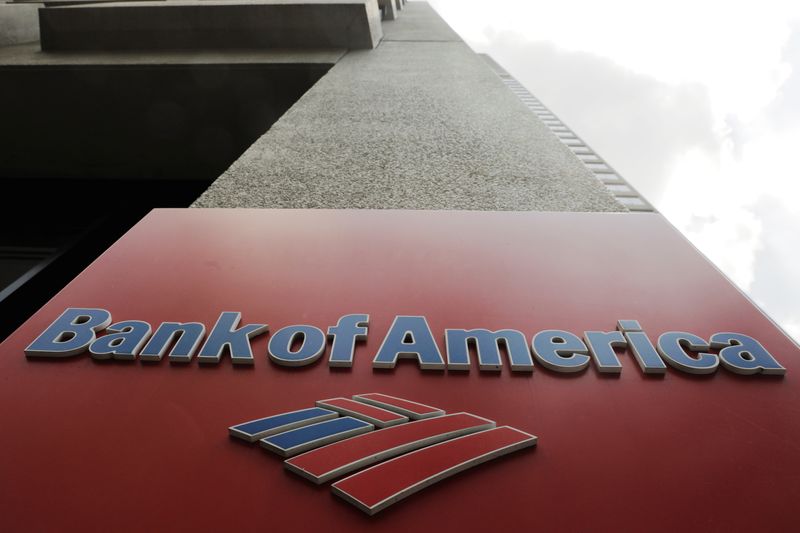 © Reuters. A Bank of America sign stands on the side of a building in New York

By Imani Moise and Niket Nishant

(Reuters) – Bank of America Corp (NYSE:) executives on Wednesday joined the chorus of U.S. bank officials predicting an economic recovery would improve business in the quarters ahead, after lower interest rates fueled a miss on third-quarter revenue.

“Our decision to add less to our credit reserves this quarter than in the two previous quarters was largely based on an improving economy relative to 90 days ago,” Bank of America Chief Financial Officer Paul Donofrio said on a call.

JPMorgan executives on Tuesday sounded a cautiously optimistic note that the coronavirus pandemic will not send the economy into the worst possible tailspin.

Bank of America set side $1.4 billion to meet future losses in its commercial loan portfolio in the quarter, far less than the $5.1 billion it provided for during the June quarter. Profit fell but beat estimates.

“We don’t expect to see a meaningful increase in net charge-offs to mid next year, and we expect that the reserve builds are behind us,” Chief Executive Brian Moynihan said in a post-earnings conference call.

Revenue in its core consumer bank fell 17% to $8 billion in the third quarter, mainly due to lower interest income and reduced credit card activity. Its loan book shrank for the first time since 2015, according to Refinitiv data.

Net interest income at the bank, a key measure of how much it can make from lending, sank 17%, showing the effects of the U.S. Federal Reserve’s moves to slash interest rates to near-zero and promise to keep them there to help spur growth.

The bank is especially vulnerable to rate movements because of the composition of its balance sheet, weighing on overall revenue that missed estimates.

The lender also posted weak results in its sales and trading arm, in stark contrast to JPMorgan and Citigroup, which reported a 30% and 16% rise in trading revenue on Tuesday.

“Unfortunately loan demand is what it is and the combination of pay-downs of credit facilities (good thing), mortgage prepays, open capital markets and overall cautious market conditions led to a 5% decline in loans and rates are really pressuring revenues (down 7%) and that’s a bigger part of the BofA story. Feels sluggish, but not far off from expectations,” said Evercore ISI analyst Glenn Schorr.

The second largest U.S. bank by assets posted adjusted revenue of $20.45 billion, compared with analysts’ average estimate of $20.81 billion, according to IBES data from Refinitiv.

Shares of the bank were down nearly 3% in early trading.