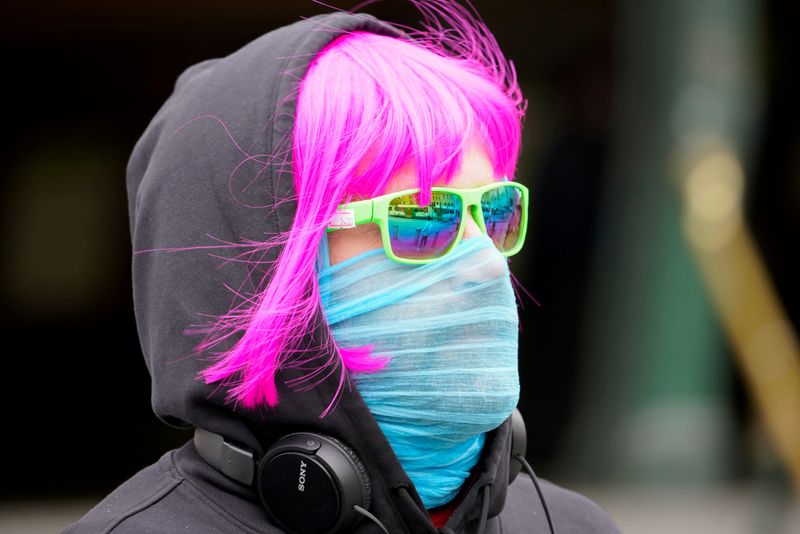 © Reuters. FILE PHOTO: A person wears a scarf as a protective face mask in Melbourne, the first city in Australia to enforce mask-wearing to curb a resurgence of COVID-19

MELBOURNE (Reuters) – Australia’s coronavirus hotspot of Victoria recorded two cases of the illness on Sunday ahead of the expected state government’s announcement later in the day on how it plans to ease socialising and movement restrictions.

Melbourne, Victoria’s capital, has been under a strict lockdown for more than 100 days. Retail and restaurants operate only on take-away or delivery orders, while people can exercise or socialise outdoors for a maximum of two hours, staying close to home.

Australia’s federal government has been increasingly putting pressure on Victoria Premier Daniel Andrews to reopen the city and the state. Andrews said that “significant” announcements should be expected on Sunday, but that the measures will not bow to the pressure.

State officials have said they would ease restrictions when the average for new daily cases over a two-week window falls below five. According to the state’s modelling, this could come towards the end of October. On Sunday, the 14-day rolling average of cases was 7.5, down from 8.1 the previous day.

With 816 deaths, Victoria accounts for more than 90% of all lives lost to the coronavirus in Australia this year. Australia has recorded just over 27,300 infections, according to health ministry data, a fraction of what has been seen in some other countries.