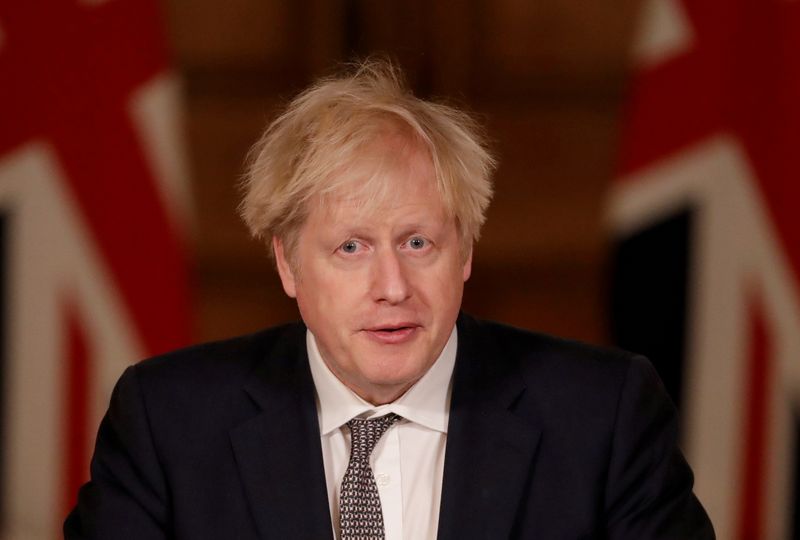 By Michael Holden and Kate Holton

LONDON (Reuters) – British Prime Minister Boris Johnson on Saturday imposed tighter coronavirus controls on millions of people in England and drastically scaled back plans to ease restrictions over Christmas, seeking to curb a new more infectious strain of the virus.

The number of cases in England has soared in the last two weeks because of a variant of the virus that scientists said is up to 70% more transmissible. Johnson said the government had to take urgent action.

“It is with a very heavy heart I must tell you we cannot continue with Christmas as planned,” Johnson told a news conference. “I sincerely believe there is no alternative open to me.”

London and southeast England – about a third of the English population – are currently in the highest level of a three-tier system of rules but will now be placed in a new Tier 4 level.

People in that tier will be required to stay at home except for essential reasons such as work, and non-essential retail will close, as will indoor leisure and entertainment. Social mixing will be limited to meeting one other person in an outdoor space.

Johnson had said on Friday he hoped England would not need a third lockdown after Christmas.

He had also resisted calls to change plans to ease restrictions for five days over the festive period and allow three separate households to meet indoors. He said on Wednesday it would be “frankly inhuman” to ban Christmas.

However, those now in Tier 4 will not be allowed to mix with others over Christmas. And all others will now only be allowed to see friends and family for one day.

The new rules will come into effect from Saturday night at midnight.

Like other countries in Europe, Britain is battling to contain the virus. Johnson’s action comes after concern about a surge in cases, sparked by the new infectious strain of the virus – VUI202012/01.

It is the rate of infection that is worrying the government and its advisors.

England’s Chief Medical Officer Chris Whitty said authorities had alerted the World Health Organization and were continuing to analyse the available data to improve their understanding of the new strain.

Britain reported 27,052 new COVID-19 cases on Saturday and 534 deaths. The reproduction “R” number is estimated to be between 1.1 and 1.2, meaning the number of cases is rapidly increasing.

“Failing to act decisively now, will mean further suffering,” Jeremy Farrar, director of the Wellcome Trust and a member of the government’s Scientific Advisory Group for Emergencies (SAGE), said on Twitter.

Britain has been one of the worst hit European countries – with more than 67,000 deaths linked to coronavirus and more than 2 million cases reported.