Apologising for “confusion”, S.Korea’s Moon vows to press on with prosecutor reform 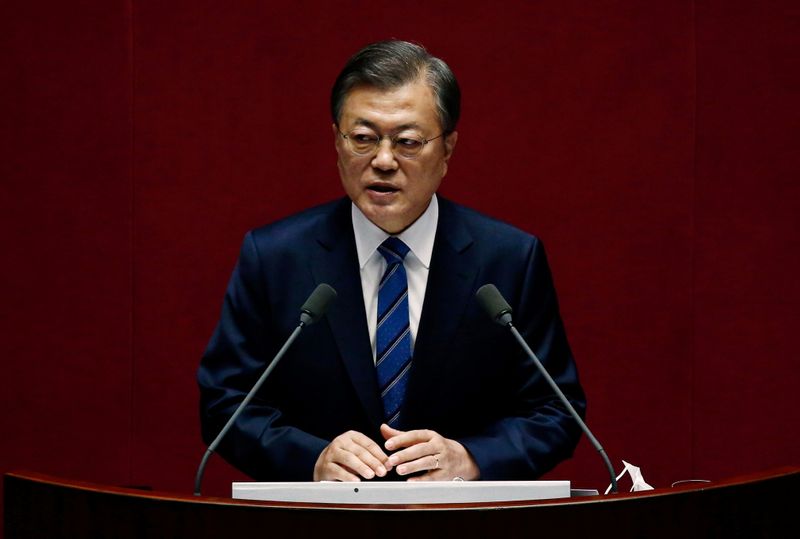 SEOUL (Reuters) – Struggling against plunging approval ratings, South Korea’s President Moon Jae-in apologised on Monday for a feud between his justice minister and prosecutor general, while vowing to press ahead with reform of the prosecutor’s office.

It is the first time that president has publicly waded into to the controversy since it erupted last month when Justice Minister Choo Mi-ae demanded the resignation of Prosecutor-General Yoon Seok-youl, accusing him of abuse of power.

“I am extremely sorry that the confusion in the political situation is causing anxiety to the people at a time when we have to unite our hearts to tackle the coronavirus and livelihood issues,” Moon told a meeting with senior aides.

The apology came as surveys by pollster Realmeter showed Moon’s approval ratings over the past week had fallen below 40% for the first time since he took office in May 2017, as his government also battled to contain spiralling home prices and a new wave of COVID-19 outbreaks. The prosecutor general has denied allegations that political motives guided his decision to pursue cases, or that he had illegally gathered information on some judges’ political leanings.

Last week a court overturned the minister’s order to suspend Yoon from duty, but his fate could be decided later this week by a disciplinary committee.

The timing is awkward for Moon, as parliament is due to vote on the legislation to reform the prosecutor’s office, which Moon described as being one of his “biggest remaining tasks.”

In a country where almost every living president has faced criminal charges after leaving office, the powerful national prosecutor’s office has long played a major political role.

Moon, who is limited to a single term and has roughly 1-1/2 years of his presidency to run, has proposed that a new agency should undertake such high level investigations in future.

Yoon, who will step down as prosecutor general when his two-year term expires in July next year, opposed the proposals and has been investigating some of Moon’s top allies, including a former justice minister who was forced to resign in October after only a month amid bribery and fraud allegations.