‘Anyone can get it,’ Trump supporters shocked at diagnosis, unwavering in support 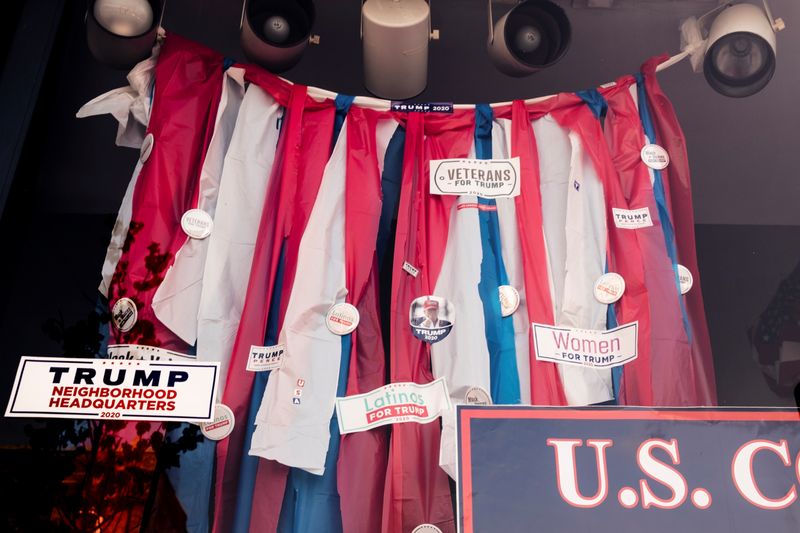 © Reuters. A range of posters, colored ribbons, and stickers showing support to U.S. President Donald Trump headquarters hang on the heart of the historic Mitchell Street in Milwaukee

By Ernest Scheyder and Nick Brown

WARREN, Ohio/BANGOR, Penn. (Reuters) – As Americans digested the news on Friday that President Donald Trump had tested positive for the novel coronavirus, some of his backers expressed surprise that he hadn’t been safe from infection and said their support for him was not diminished.

“It was shocking,” said Maranda Joseph, 43, of Warren, Ohio, who has 12 Trump flags in her front yard festooned with skeletons and other Halloween decorations. “To see he has it wakes you up a bit. Anyone can get it, even the president.”

Trump tweeted early Friday morning that he and his wife, Melania, had tested positive https://www.reuters.com/article/us-health-coronavirus-usa-trump/trump-shows-covid-19-symptoms-as-positive-test-rocks-white-house-campaign-idUSKBN26N0K4 after a whirlwind campaign week in which he visited seven states https://www.reuters.com/article/idUSKBN26N30G and debated with his Democratic rival in the Nov. 3 election, Joe Biden.

The Republican has played down the risks of the virus and COVID-19 disease that has killed more than 207,000 Americans, drawing criticism for his erratic messaging and recent resumption of campaign rallies where his supporters often are crowded together and don’t wear masks.

Officials in Minnesota and New Jersey – two of Trump’s stops this week – urged anyone who had attended his events to be tested.

Joseph, a homemaker, said she thinks more people should wear masks at future Trump rallies, though she added that she would attend one herself once the president recovers.

“People with compromised immune systems should stay home,” she said.

Some in Warren expressed skepticism that Trump even has the virus, citing Ohio Governor Mike DeWine’s positive test earlier this year before he tested negative later the same day.

“There’s so many false positives out there. Has Trump had a second test yet?” asked Sharon Tice, 70, who sells Trump T-shirts and other memorabilia. “But if he does have it, it could influence the way he sees things.”

“It’s, like, heartbreaking inside, but he’s a strong man. He’ll get through it,” she told Reuters.

The White House said Trump was being moved into a special suite at Walter Reed National Military Medical Center in Bethesda, Maryland, for the next few days as a precautionary measure.

A source familiar with the situation said Trump has a mild fever and a White House official said doctors urged the move so Trump could get immediate care if needed.

“If he’s down in bed and sick and needs a respirator, that would probably change a lot of people’s opinion. But he may just feel some flu symptoms. He may just have to stay in bed a few days. You don’t know. It affects everyone so differently.”

Trump’s gender, age and weight https://www.reuters.com/article/idUSKBN26N23I are all factors that make him more vulnerable to developing severe COVID-19 and give him a notional risk of around 4% of dying from it, health experts said on Friday.

Some Republicans said the diagnosis could actually help the President.

“Trump will prove to the American people that you can survive COVID,” said Cathy Lukasko, auxiliary chair of the Trumbull County, Ohio, Republican Party.

More than 7.2 million infections have been reported in the United States since the pandemic began seven months ago.

Lukasko was running the party’s offices on Friday without a mask, handing out signs for Trump and local Republican candidates.

“This might be a nice little break for him,” she said.

The reactions reflected a longstanding pattern – Americans are largely settled in their views on Trump. A Reuters/Ipsos poll published on Thursday showed Biden holds a 9-point lead over Trump, the same margin in six of the last seven national polls, a period of time that has seen the death of Supreme Court Justice Ruth Bader Ginsburg and Tuesday night’s chaotic debate.

In Bangor, Pennsylvania, Trump supporter Jack Cooper, a 70-year-old retired electrician, said the president was paying the price for underestimating the virus’s dangers. He said, however, that would not stop him for voting for Trump again.

“He’s getting a taste of his own medicine,” said Cooper, who lives in a crucial swing district. “He was fooling around without a mask in big crowds. It’s like bringing a pit bull into a big crowd — something is gonna happen.”