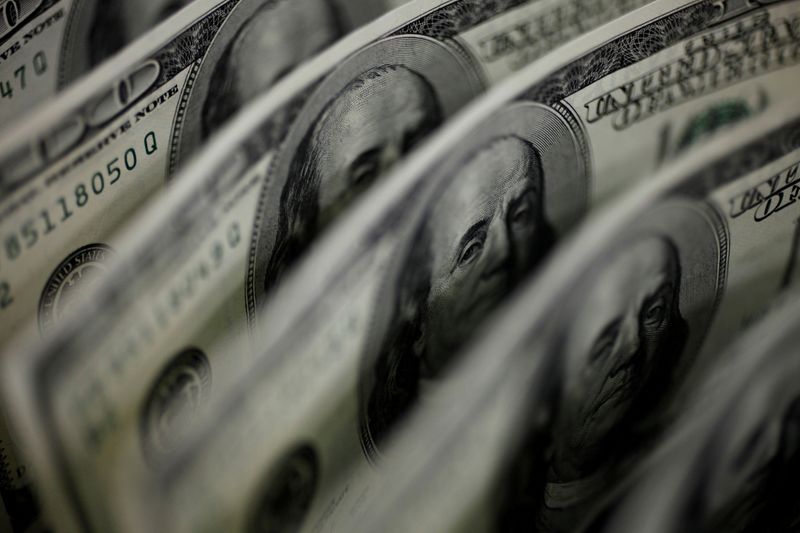 NEW YORK (Reuters) – A surge in the bond market’s best gauge of how much inflation investors expect in the years ahead could be underestimating how long the economic shock from the pandemic will last, even if the new Joe Biden administration pushes its proposed massive stimulus package through Congress quickly.

Investors have piled into U.S. 10-year Treasury Inflation Protected Securities (TIPS), driven by expectations of an economic recovery, continued fiscal support from Congress and steady monetary accommodation from the Federal Reserve. That has pushed TIPS yields lower and lifted the implied inflation rate at which an investor would break even buying either an inflation-adjusted 10-year note or normal 10-year Treasury debt.

The U.S. 10-year inflation breakeven rate, the yield difference between 10-year Treasuries and 10-year TIPS, rose to 2.113% on Tuesday, the highest in more than two years, climbing more than 45 basis points since early November.

The TIPS breakeven shows that investors expect inflation to average 2.1% a year over the next 10 years.

Some investors believe, however, that rising breakeven rates do not necessarily suggest inflation will keep on increasing as well. Even with the economy reflating, investors have said it could be a year or two before gross domestic product growth rises back above trend. [nL1N2IK1OR]

“The Fed has tried everything to pump up the economy, but realized inflation is still below 2%,” said Kelly Ye, director of research at IndexIQ, a unit of New York Life Investment Management Holdings.

“So it all boils down to whether you believe the economic recovery will be sustained. Until we see that, it’s difficult to see higher sustained inflation at this point.”

Last week, data showed U.S. consumer prices increased 0.4% in December due to an 8.4% jump in gasoline prices, but core inflation rose just 0.1%. In the 12 months through December, the CPI advanced 1.4%. Overall, the annual inflation rate is still below the 1.7% average over the last 10 years.

The spread between 10-year breakeven inflation and core CPI has expanded to roughly 50 basis points, its widest since 2014, Wells Fargo (NYSE:) Securities said in a research note, suggesting there was a disconnect between the two indicators.

IndexIQ’s Ye pointed out that at the end of 2007, the year before the global financial crisis, the 10-year inflation breakeven rate was forecasting a 2.3% rise in prices over the next 10 years. Yet, average inflation from 2007-2017 was 1.6%.

“Markets have expectations for TIPS based on supply and demand, which would not necessarily indicate what is realized inflation.”

A better measure, Gittler said, would be the Cleveland Fed’s method of estimating the future inflation rate, which includes several forecasters’ surveys, inflation swaps, actual CPI data and some Treasury bond yields. It does not include TIPS data, he added, which tends to be affected by liquidity, taxes and other matters unrelated to inflation.

Extrapolating from the Cleveland Fed’s estimates, Gittler said it would likely take 15 years for the economy to achieve a 2% inflation rate.

That said, investors remained well-positioned on TIPs, anticipating inflation to shoot higher, although some like Newton Investment Management expect it to rise only moderately.

Paul Brain, head of fixed income at Newton, which oversees $58.1 billion in assets, said he sees U.S. inflation rising by the end of the year and has maintained the fund’s TIPS allocation.

“Ultimately, for inflation to remain sticky, you’ve got to have a pick-up in wages,” Brain said. “If you don’t get that, inflation could drop down again.”