Algerians impatient for change with president still out sick 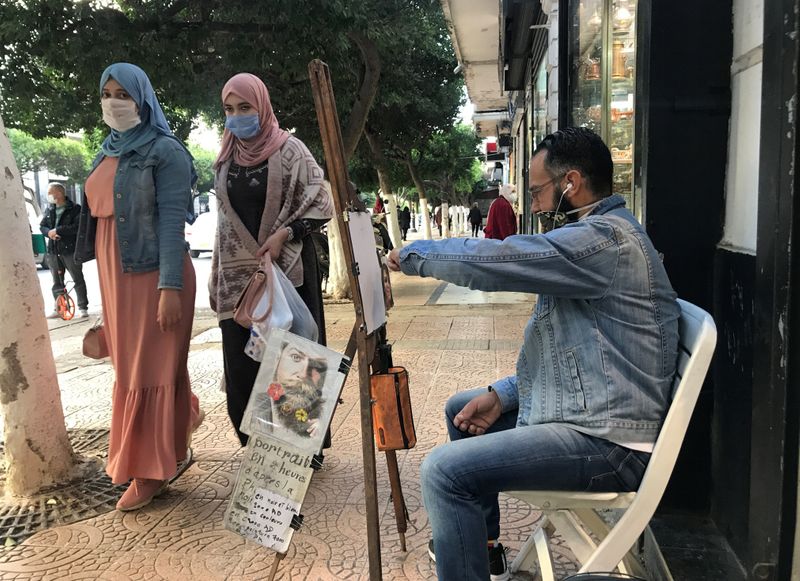 © Reuters. A man draws as women walk on a street in Algiers

ALGIERS (Reuters) – Algerian President Abdelmadjid Tebboune’s first appearance since being hospitalised in Germany with COVID-19 in October was intended to reassure a country where big political decisions are long overdue.

But on the streets of Algiers people voiced growing impatience after the five-minute video message he gave on Sunday saying he would still be away for up to three weeks.

“Most of our demands are still awaiting a response,” said Ahmed Abbachi, a member of the leaderless protest movement known as Hirak.

The major energy producer has been in turmoil since early last year when mass protests pushed the old president Abdelaziz Bouteflika from power along with many of his clique, but left much of the ruling elite at the helm.

The period of unrest, and this year’s pandemic, have delayed Algeria’s efforts to address systemic frailties looming over the economy as declining oil and gas revenue threaten lavish social spending.

The 75-year-old, a heavy smoker, appeared gaunt in his video message, the first sight that Algerians had had of their president since he went to Germany.

The absence of any photographs or videos spurred rumours that his condition was worse than the official news bulletins proclaiming his good health were letting on.

It reminded many Algerians of the long years when Bouteflika was incapacitated by illness, leaving government largely rudderless while rival power blocs in the ruling elite jostled for influence.

“Bouteflika was completely unable to speak, to walk, and we were told over and over again that he was capable of leading the country,” said plumber Antar Aissaoui, before Tebboune’s video appearance.

The president will have a full in-tray when he finally returns to Algiers. The government is pushing a programme of economic reforms seen as necessary to avert a looming fiscal crunch after burning through more than half its foreign currency reserves in five years.

While demonstrations have not taken place since a COVID-19 lockdown began in March, the referendum he pushed in November on constitutional changes had turnout of only a quarter of registered voters.

“Algeria faces one of the most difficult periods of its history. Threats are surrounding us from all directions,” said schoolteacher Rachid Chalabi, referring to the internal political crisis, looming economic threats and conflicts in neighbouring countries.

“Tebboune will face his biggest challenges after recovering. Everything indicates that the path to stability is still long,” said 37-year-old engineer Djamel Taibi.