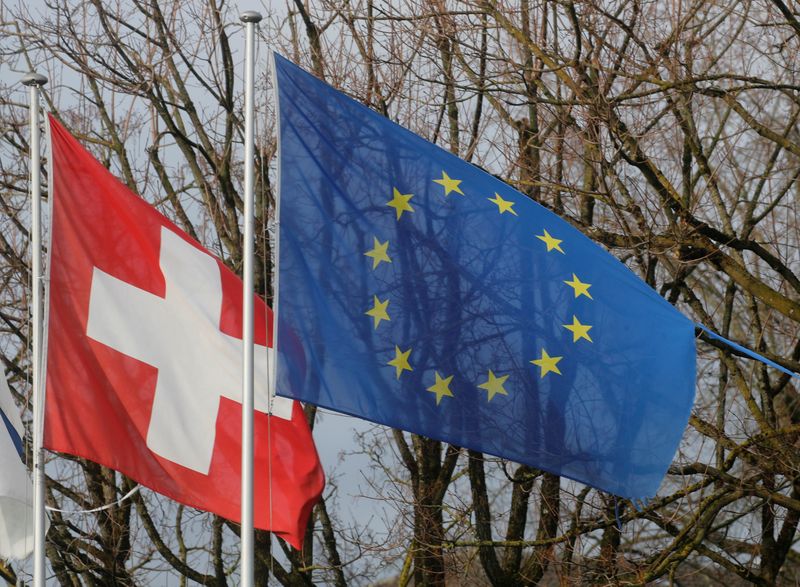 © Reuters. FILE PHOTO: Switzerland’s national flag flies beside the one of the European Union in Steinhausen

ZURICH (Reuters) – The Swiss government is sailing into rough waters as it seeks to tackle a new treaty on relations with the European Union, even though it won a weekend referendum against domestic eurosceptics seeking to strengthen curbs on immigration from the bloc.

Voters rejected by 62%-38% on Sunday the right-wing Swiss People’s Party’s (SVP) push to scrap a pact allowing free movement of people from the EU to a nation where foreigners make up a quarter of the population of 8.6 million.

But the resounding referendum triumph does not translate into easy acceptance of the wide-ranging treaty with the EU that has lain dormant for two years.

Arguments over state aid, EU citizens’ access to Swiss welfare benefits and unilateral Swiss rules designed to protect high wages from competition by cross-border workers on temporary assignments have proved too tough a nut for the Swiss side to crack in domestic talks to forge a consensus.

Justice Minister Karin Keller-Sutter said after Sunday’s vote that the government would take weeks to establish its position and resume talks with Brussels on the draft treaty, which would have Bern routinely adopt single market rules and create a new dispute settlement platform.

That is unlikely to go down well in Brussels, already so irked by Swiss foot-dragging that it launched a battle over cross-border stock trading last year.

“Switzerland and the EU is a love-hate story,” newspaper Le Temps wrote. Despite the weekend vote, “never has the conclusion of a framework agreement … seemed further away.”

“Of course, I look forward to the Swiss (cabinet) now moving swiftly on the signature and ratification of the International Framework Agreement that we negotiated in 2018,” she added.

Swiss politicians across the political spectrum and labour leaders have said they could not endorse the treaty as it stands and called for maintaining the status quo of 120 custom-made bilateral pacts governing ties, at least for now.

That could be a hard sell for the EU, which is loath to give Switzerland any concessions that British negotiators could seize on in separate EU negotiations over Brexit.

Tages-Anzeiger newspaper columnist Fabian Fellmann said the Swiss government would have to play for time while it sought domestic support and Brexit was finalised.

“That may seem timid, but it is better than heading for an open break with the EU,” he wrote.

European Council President Charles Michel had kind words for the Swiss at the weekend. But he tweeted on Friday he would not accept cherry-picking from either London or Bern.

“Access to the EU’s large market will no longer be sold off. From now on, we will better enforce the level playing field, in a market open to those who respect its standards. Whether they leave our Union or want to move closer to it,” he wrote.